As the Government issued its advice on social distancing, between Monday, March 16 and Thursday, March 19 alone, an extra 42 million shopping trips were made, with 88% of households visiting a grocer. The week ended with the closure of all pubs, restaurants and cafes.

Kantar estimate that 503 million meals which would normally have been eaten out-of-home will now take place at home every week, mostly lunch and snacks. 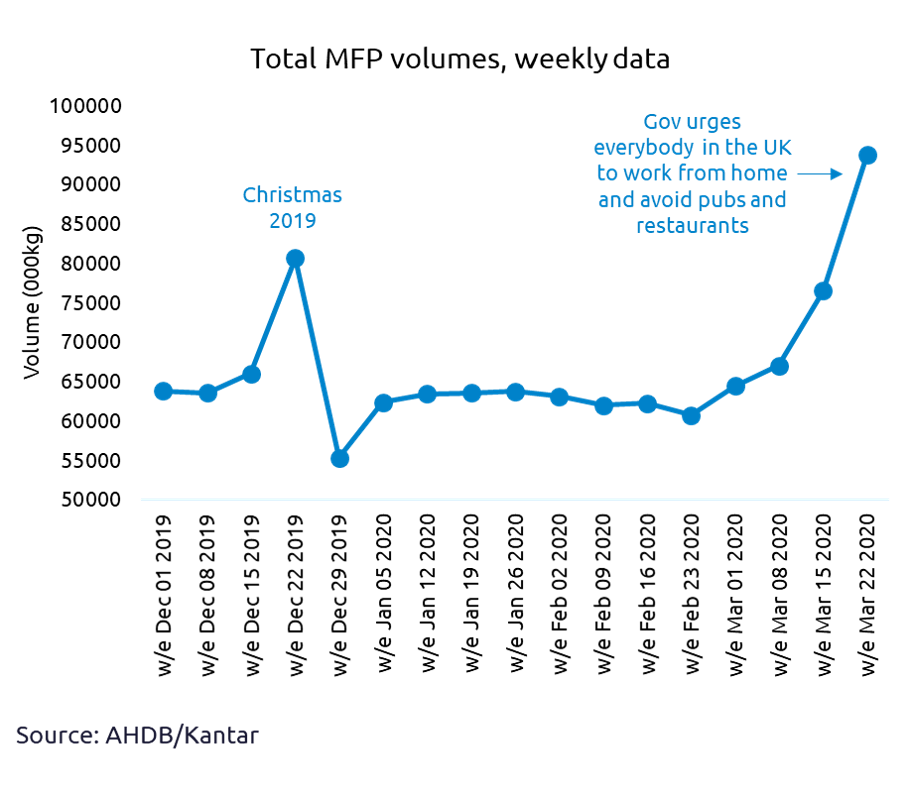 AHDB has summarised the impact on the various sectors. Meat, fish and poultry grew ahead of the market, with spend up nearly 24% in the four weeks to March 22. The main uplift came during the final week of the data period (16-22 March) when social distancing was ramped up and schools closed.

During the period, fresh meat accounted for 77% of volume, with sales up 20% in volume terms, while frozen and ambient (canned) meat products grew by 31% and 73% respective, as shoppers have stockpiled items with a longer shelf life.

Total pigmeat sales were up 18.4% by volume and 25.5% in value. Bacon and sausage volumes were up 22% and 33% respectively during the period, outperforming the overall grocery market.

The AHDB/YouGov Consumer Tracker shows that people think sausages are easy to cook and suitable for mid-week meals, making them a good fridge/freezer staple during times like these, AHDB said.

Sliced cooked meat volumes grew 10%. However, with school closures and full coronavirus lockdown coming after this data period, the impact of the loss of the carried-out lunch is yet to be fully felt – with ham being a key lunchbox staple.

Primary pork volumes were also up 10%, although this is less than processed pigmeat and the other primary proteins. Leg and shoulder joints actually experienced a loss of volume, although loin roasting and chops grew 52% and 36% respectively.

Did retail offset losses to foodservice?

Based on the March data, AHDB estimates that the rise in beef and pigmeat sales would both exceed the losses in food services sales.

Lamb volumes would have fallen short, with milk sales also slightly below what AHDB estimates is required to offset the foodservice losses.

AHDB added: “It’s also important to remember that the market is expected to slow from these key ‘panic buying’ weeks. Therefore, these levels of volume sales are unlikely to be sustained, putting lamb in particular at risk.

“Those products perceived as highly versatile (such as beef mince, chicken breast and pork sausages) are likely to continue seeing enhanced volumes.”