The fifth Farm Safety Week has been given a publicity boost by the involvement of ‘Pub Landlord’ Al Murray, who has revealed his role in saving a young farmworker’s life when he was 12.

The comedian had been holidaying on his cousin’s farm during harvest time and had spent the day playing in the fields while his father, helped out with the combining. As he was cycling back to the farmhouse, he heard cries for help coming from near one of the machines in the field.

He approached the cries and spied a young farm worker, trapped in a baler, in pain and losing a lot of blood. 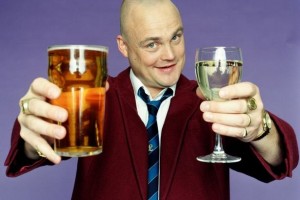 Having tried and failed to pull the trapped teen, Chris, out of the machine by his boots, Al asked what he could do to help and was talked through the shutdown procedure for the machine by the teenager.

Al explained: “The tractor was Dutch s  the stop control, or the ‘whacking great knob’ as Chris described it, was located on the opposite side to where it should be.”

He managed to stop the machine then raise the alarm and brought his father who dismantled the machine to dislodge the trapped arm and tourniquet the injury before the ambulance arrived to take Chris to hospital.

The young farmworker, thankfully, did not lose his arm but the tale has been used to highlight the constant dangers of working with machinery and the importance of following the SAFE STOP procedure.

Rick Brunt, HSE’s head of agriculture, waste and recycling sector, said: “Every year we have to report that agriculture has the poorest safety record of any occupation in the UK. This is made even more tragic by the fact that the deaths and injuries are avoidable. The precautions to prevent people being killed and maimed on farms are well known and can be easily applied.”

Stephanie Berkeley from the Farm Safety Foundation, the charity behind Farm Safety Week, said: “On a farm, as with any business, the number one resource is the people so why is it that year on year we are seeing these hard working and dedicated workers suffering life changing and life ending accidents?”

“Many farmers think ‘farm safety last’ rather than ‘farm safety first’ but most of these accidents are avoidable. Unlike other occupations, farmers don’t normally retire at 65 and often work well into their 80s.

“Simple factors such as habit, haste, fatigue, and improperly maintained machinery contribute to this perfect storm but this Farm Safety Week, we hope that by hearing the stories of other farmers and extraordinary people like Al Murray who have had personal experience of farm accidents, we can get farmers of all ages to realise that this week, and every week, farm safety is a lifestyle, not a slogan.”

Also use the hashtag #Lensleg to follow the latest in the farmer-led safety campaign, launched by Hertfordshire farmer Stuart Roberts.

Commenting in a recent Pig World feature on agriculture’s poor safety record, NPA chairman Richard Lister said: This is a very sobering set of figures for the whole of the agricultural industry.

“I think as producers, owners and managers, we all have to consider if we are doing everything within our control to avoid the prospect of accidents occurring.

“The involvement of all staff in this process will be key to affecting change and enabling us to create a safe working environment.”

NFU farm safety and transport adviser Tom Price said: “The fatal injury rate for agriculture last year was 7.61 per 100,000 persons employed. This is massively above the all industry average which was just 0.43 per 100,000 employed.

“”he key to improving the safety record of agriculture is to manage risk. We all manage risk as part of our everyday lives.

“Accidents can be prevented but an awareness of the risks we face working in agriculture and how to manage them must be improved.”