Russian imports from Brazil are still yet to return to the high levels that were seen before the ban during 2018. This may be partly due to Brazilian exports shifting to China instead where demand is currently very high. However, with most other global exporters still banned, Brazil is still the largest pig meat exporter to Russia for the year-to date.

Charlie Reeve, AHDB’s trainee analyst said: “Russian imports for January to August grew by 17,900 tonnes year-on-year. However, in the most recent months import levels have dropped away.

“Across July and August, Russia only imported 10,900 tonnes of pig meat (exc. offal). Belarus was the largest supplier at this time, despite sending less than half of last year’s levels, as volumes from Brazil were even lower. With exports at around 15,000 tonnes, it was a net exporter across this period.”

Pig herd stabilises in Denmark
Meanwhile.figures published by Statistics Denmark show that the Danish pig population, as at October 1, decreased by over 3% on a year earlier, to 12.6m pigs. While numbers continue to be lower than last year, the decline seems to have stabilised. 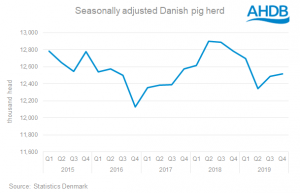 These latest figures indicate recent improvements in productivity may now have stalled. Piglet numbers were down by 3.5% whereas the number of breeding sows was only down 3%.

Danish pig meat production has been lower so far this year. Whether the fall in piglet numbers translates to a continued decline Danish production will depend too on the level of live exports. So far this year, live exports, particularly to Germany and Poland, remain at similar levels to last year.

The number of pig farms in Denmark has been falling in recent years and it seems that the industry continues to restructure towards breeding rather than finishing. 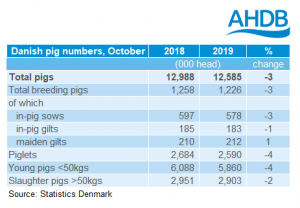 Duncan Wyatt, AHDB’s lead analyst, said: “There was some slight growth in maiden gilt numbers in the October figures. However, this hardly indicates a widespread appetite for expansion. Long-term concerns about regulation, EU demand and ASF spread mean producers remain cautious. This is despite improving producer margins and a brighter outlook in the medium term.”