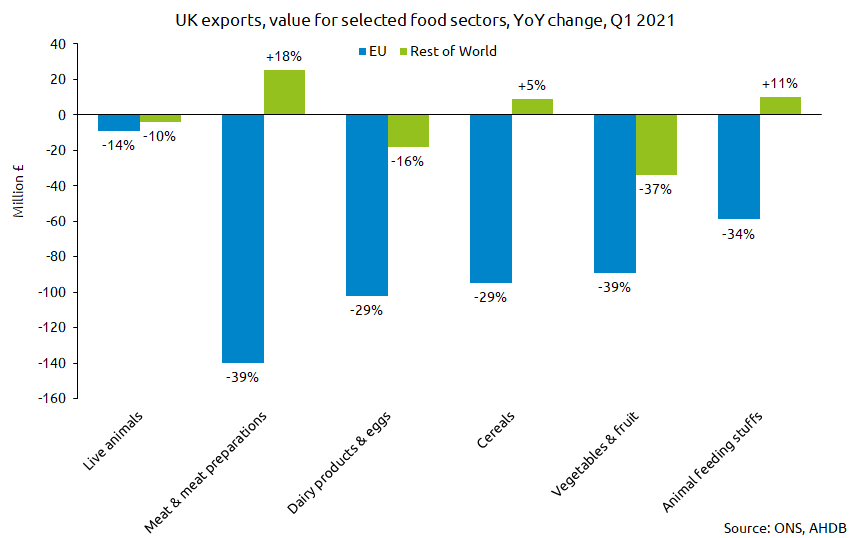 Exports to the rest of the world for the first quarter were also down 6% (-£73m) to total £1.1bn, with the depressed trend between exports to both EU and Non-EU countries suggesting that the Coronavirus pandemic has some part to play in influencing trade,

However, Forshaw noted that the larger declines for product destined to the EU also may suggest that  EU-exit issues are disproportionately contributing to the reduction in those trade flows, as overall, total exports for live animals and food for Q1 are down 21%, and total £2.8bn.

Imports from the EU were similarly depressed in Q1, with imports of food and live animals down around 14%, totalling £5.8bn.

This shortage was somewhat offset by imports from the rest of the world are up in the first quarter, by 3%, been primarily driven by an increase in animal feeding stuffs. 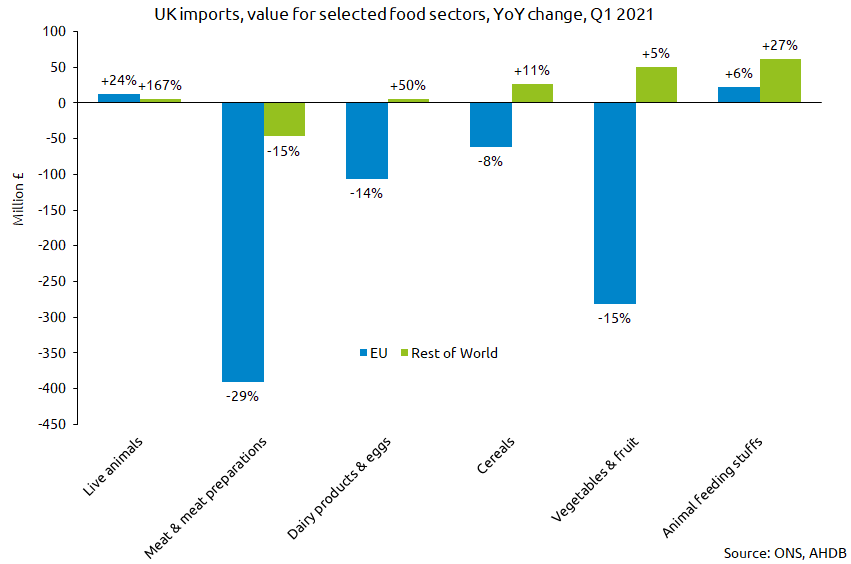 “Interestingly, imports from the EU in March alone, suffered from a greater decline year-on-year than UK exports to the EU; a 9% decline (-£225m) in EU to UK trade, compared to 2% (-£19m) for trade going the opposite way,” said Forshaw, indicating that the coronavirus pandemic continues to impact the food service sector, which rely on imports more so than the retail sector in the UK, which could explain why demand for imported food products have not rebounded at the same pace as UK exports.

He added that it is also worth noting that trade, particularly in food and agricultural goods tends to fluctuate throughout the year as domestic supply and demand is balanced.

“Therefore it is useful to make year on year comparisons, as well as quarter on quarter or month on month comparisons which may inadvertently be highlighting some of these normal seasonal fluctuations,” said Forshaw, pointing out that in the case of EU Exit, these comparisons may not properly take account for the ‘stockpiling’ that occurred ahead of the EU Exit deadline.