EU pig prices have also started to firm, albeit from a very low base and in a slightly faltering pattern, he adds. The hope is that this momentum can be maintained in the EU market in the short term, and that the EU herd restructuring and further tightening of supply later in the year will provide a more solid foundation for sustainable prices for EU producers.

Future prospects
But what are the prospects for UK producers in the year ahead?

Andrew Knowles says the December census data reported a stable breeding herd, but a more recent forecast suggests that pig supplies will tighten in the months ahead following the trend on the continent.

“Kantar Worldpanel shows that demand for pork is also increasing,” he says. “In the 12 weeks to March 27, fresh and frozen pork retail sales returned to growth, up just under 3% year-on-year, with volumes of leg, loin and shoulder roasting joints increasing 13%, 10% and 6% respectively.

“It’s forecast that in 2016, when including processed pork products and live equivalent, pigmeat exports will account for a record 32% of UK production, worth £390 million.”

At present uncertainties around Brexit are impacting exchange rates, in the short term diluting the EU price gains in sterling terms, Andrew says, but he’s hopeful that the June 23 referendum result will bring with it more stability in exchange rates, enabling improvements in EU pig prices to be more consistently reflected in UK prices.

“There are indications that 2016/17 will bring better times for producers both on the Continent and in the UK. Those businesses that focus on superior technical performance, efficient production and lower production costs will prosper most from any upside in the market.

“But ultimately, pork needs to find new ways to appeal to consumers and offer them something they’re truly willing to pay more for if it’s to grow its value and presence in the customers basket.”

Environmental impact
Sustainability is at the core of ForFarmers’ activities according to the company’s corporate affairs director, Nick Major. He says there’s no doubt that the pigmeat supply chain is under scrutiny, whether it be about health, the environmental impact of livestock production, societal concerns over various production systems or indeed resistance to antibiotics – antimicrobial resistance or AMR.

“These are all challenges that I believe the pig industry will meet,” Nick says. “Despite those who believe that the way to reduce the environmental impact of livestock production is to reduce livestock production, all the statistics show that demand for animal protein will increase during the coming years due to population growth, increasing wealth and urbanisation.

“Therefore, ForFarmers has a key role as a livestock nutritionist to continually improve the sustainability of livestock production.”

In fact, Nick believes that the feed industry is inherently sustainable.

“Helping our customers improve resource efficiency is what we do on a daily basis,” he says. “By this, I mean producing more output for each unit of input. That means improving feed conversion ratios, increasing sow productivity and reducing mortality. Using resources efficiently also helps to make the direct link between sustainability and profitability.”

Nick Major adds that ForFarmers has a role to play in improving the health and welfare of the livestock it feeds.
“This is an important part of our approach to sustainability,” he says, “and while society will decide what production systems are acceptable, in every innovation project within ForFarmers, there are a number of sustainability criteria that are based around improving resource efficiency and/or health and welfare.”

Nick says industry leaders need to lead on sustainability, and that one key example in this area is AMR.

“There’s no doubt this is a hot topic and the pig industry is doing a huge amount to react to concerns about antibiotic usage,” he adds. “Excellent initiatives such as the eMB project, the recent publication by the NPA of its Antibiotic Stewardship Programme and the work of the Pig Health and Welfare Council antimicrobials subgroup are great examples.

“At ForFarmers, we’ll play our part by utilising and sharing the experience we have in The Netherlands on antibiotic reduction strategies with our customers and their vets and supply chain partners, and also lobby via our trade associations to ensure that the European regulations that cover the use of in-feed medication are workable.” 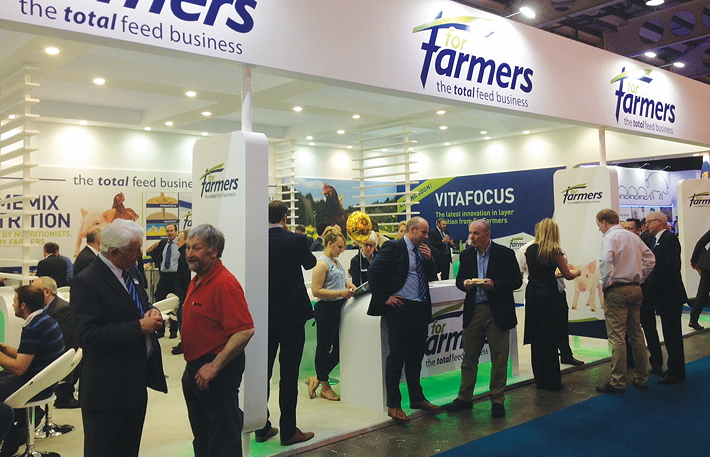 “This encourages young graduates to make a career in the pig industry,” he says. “In this fast-evolving and dynamic industry, there’s never been a more stimulating time for those at ForFarmers and the wider industry.”

Product development
ForFarmer’s UK operation has a long and rich heritage in the area of R&D, and this has been considerably enhanced since the takeover by the Dutch group in 2012.

“We now have access to a much deeper knowledge pool underpinned by our strategic partnership with Trouw Nutrition,” the company’s UK marketing manager, John Cessford, says. “The new VIDA piglet product range we brought to the market in late 2015 was a great example of teamwork within the entire ForFarmers organisation, including our Nutrition Innovation Centre (NIC) and colleagues from Trouw’s R&D, marketing and technical infrastructure.

“It’s the prize of synergy and speed to market we’re seeking out. We can now see these synergies coming through and can, as a result, move forward to bring a full life stage of pig products to the market. We’re already working flat out to bring a new sow feed product range to the market in the first quarter of 2017, and pig grower and finisher work is also already underway.

“All these new developments are targeted at improving the productivity and performance of our customers’ stock.”

John says the ForFarmers’ ethos is all about continuous improvement to the capabilities of all its pig feeds.
“This relentless focus in a dynamic, fast moving market is essential to our programme of nutritional innovation,” he adds. “It’s what we do and is ingrained in our DNA as a business. Getting to the market first and giving our customers the performance benefits in an increasingly competitive business is the goal we have set ourselves as a team, and the progress so far has been very pleasing indeed.”

New ideas
All companies go through change processes from time to time, and ForFarmers is no different.
“We’re is in the middle of a major change process exercise,” communications specialist Tom Welham says. “New colleagues are entering the business providing new ways of working and refreshing new ideas. In the past year, the ForFarmers UK Pig Business Unit has recruited a number of graduates in its team. This new team is concentrating on delivering the nutritional products and solutions needed by pig producers.”

ForFarmers is also now providing the funds for new acquisitions in areas that are strategically adjacent to the UK operation’s business model.

“All of this is geared to maximising the opportunities in what we describe as the ‘Total Feed Business’,” Tom adds. “In its purest sense, this means providing nutrition to our farmer customers in a variety of forms – complete pig feeds from our mills; concentrates, powerpacs, balancers, and premixes from our Homemix Nutrition; and straights, co-Products and liquids from our Dry, Moist & Liquids Division.”