Reports suggest some slowdown in Chinese demand, and logistical problems arising from the coronavirus lockdown, AHDB analyst Bethan Wilkins said. Export prices to China were the lowest since August.

Shipments of pig offal dropped by a third during the month, offsetting the rise in fresh/frozen pork shipments. Trade with most destinations, including China, was reported as down.

However, while total volumes were down when offal is included, the overall value of exports was still higher than in February last year, at £45.2m (+11%). 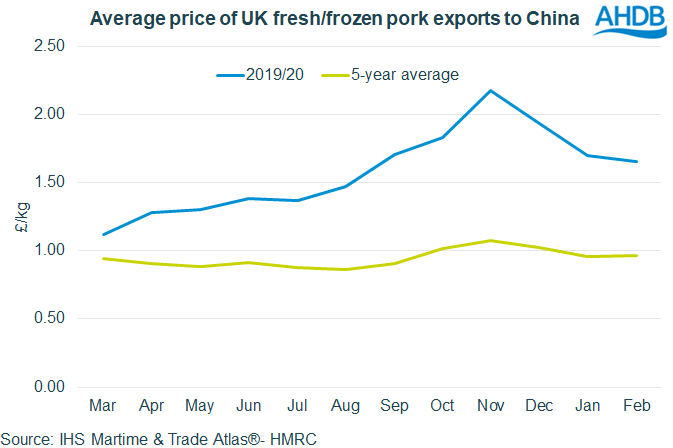 Meanwhile, the UK imported 21% less fresh/frozen pork in February compared with the same month in 2019.

“A declining trend has been seen since April last year, through the drop this month was particularly strong. Less pork was received from all of the key suppliers,” Ms Wilkins said.

“The ease in import volumes is probably partially due to Brexit stockpiling at this time last year. However, prior to ‘panic-buying’ from consumers amid the coronavirus outbreak, demand in the UK had been relatively weak with retail figures showing declining sales volumes.”

EU pork has also been relatively expensive; during February, the average import price was £2.35/kg, over 30% higher than a year earlier, reflecting a similar rise in EU finished pig prices.

This meant that despite the lower volume, the value of fresh/frozen pork imports was 4% higher, at £70.4m. In contrast, GB farmgate prices were only 18% higher, and so, unusually, have been below the EU average, Ms Wilkins added.

The UK is now paying a similar price to China for imported pork, although the Chinese average includes offal products. Bacon imports were also lower again during the month, reflecting falling volumes from Germany, Denmark and Italy in particular.

A declining trend also continued to be seen in shipments of processed products and sausages.