FLI, Germany’s National Reference Laboratory for ASF, reported that the organic farm is in the existing ASF core zone, established for wild boars, while the smallholding was in a previously ASF-free white zone. The cause of the two case is ‘unclear’, the FLI said. 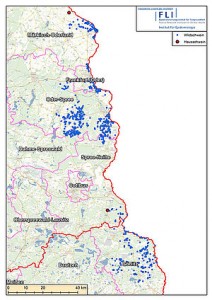 FLI president Dr Thomas C. Mettenleiter said: “Unfortunately, these cases do not come as a complete surprise. An entry in German domestic pig populations had to be expected at the latest since the detection of the infection in wild boars in Germany in September 2020.”

“In its risk assessment to exercise and pasture land conversations from April, FLI stressed how important the protection of pigs was, especially in the core zone and in the vulnerable zone.”

The ASF virus can be transmitted from wild boars to domestic pigs through both direct and indirect contact, the FLI said.

The infection usually occurs oro-nasally. The pathogen is very stable and remains infectious in the environment for a long time. Therefore, it can be transmitted through raw or insufficiently heated meat products, contaminated feed, vehicles, clothing and tools, among other things.

The discovery will not help the German pig industry, as it works to re-establish its pork export markets, which have been lost since the initial emergence of ASF in wild boar.

“Keep Calm! Even if the ASF has now been determined for the first time in domestic pigs in Germany, there is no need to panic!” ISN said.

It stressed that the two companies affected are located within the already existing restriction zones in Brandenburg and have already been ‘evacuated’.

“Therefore, the situation for German pig farmers will not change significantly,” said ISN managing director Dr Torsten Staack, pointing out that German pork exports to many third countries are already blocked due to ASF in wild boar.

“The regionalization principle continues to apply at the European trade level, which means that there are currently no changes for the German sales markets in the EU,” he said.

The supply of slaughter pigs in Germany is currently an all-time low, although German pig farmers are ‘currently groaning under a ruinous price low’, making a loss of 30-40 euros per animal.

Mr Staack added: “Anyone who tries to keep the price down despite this described situation is shamelessly exploiting the situation with advanced arguments. We therefore expect a clear statement from customers in Germany – an at least stable price level is now the imperative and correct signal to the German pig farmers!”