On top of the increase in volumes exported, the value of supplies totalled £44.1 million, nearly 60% higher than October 2018, as a result of higher export prices.

In contrast, total offal exports fell by almost 25%, down from 9,500 tonnes in October 2018 to 7,300 tonnes in October 2019. This stemmed from a significant decline in shipments to Hong Kong, which were less than 20% of last year’s volumes. It may be that some of this product is now being exported to China as pork.

The value of offal exports in October was £8.1 million, down 8% in a year earlier. 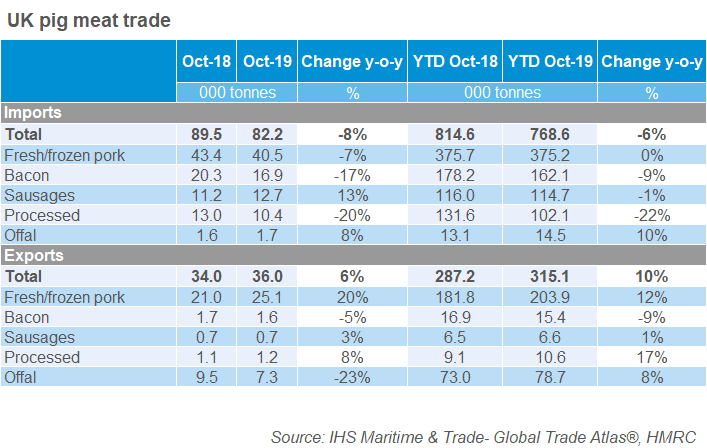 Imports
UK pork imports in October totalled 40,500 tonnes. Imports from Denmark, in particular, were lower; Danish imports accounted for 37% of the total in the month last year but were only 31% in October 2019 as supplies fell by 22%.

Given the strong prices across the EU, the value of pork imports went up by 17% to £92.9 million.

Bacon imports fell by 17% in October, compared with a year earlier, again largely resulting from a 31% decline in supplies from Denmark. It was a similar picture for processed pig meat, which fell by 20% on the month last year given an 85% fall in Danish volumes.

Sausages were the only important category to record an increase in imports, up 13% year-on-year, despite another large drop in Danish supplies.