“Recent progress in moving finished pigs off farms to slaughter has boosted demand for weaners to fill rearing/finishing places, commented Ms Wilkins, noting that in the latest EU census results for the end of 2020, fattening pig numbers were up on the year overall, although a key producers Germany and the Netherlands are heading into a contraction.

Ms Wilkins also noted that most of the leading producers recorded strongly rising prices, particularly in Italy, Belgium, Spain and the Netherlands, and that rising prices might indicate that demand from finishers is still increasing, driving competition for the available weaners.

The total number of pigs in the EU-27 (excluding Malta) increased on the previous year in December 2020, totalling 146.1 million head. This was an increase of 3.0 million pigs (2%) compared to the equivalent figure for December 2019, according to AHDB livestock analyst Charlie Reeve.

The largest growth in numbers was seen in Spain, Denmark and Poland. Spain increased its herd size in 2020 by 1.43 million head, widening the gap to reaffirm its positions as the EU’s biggest producers of pigs. 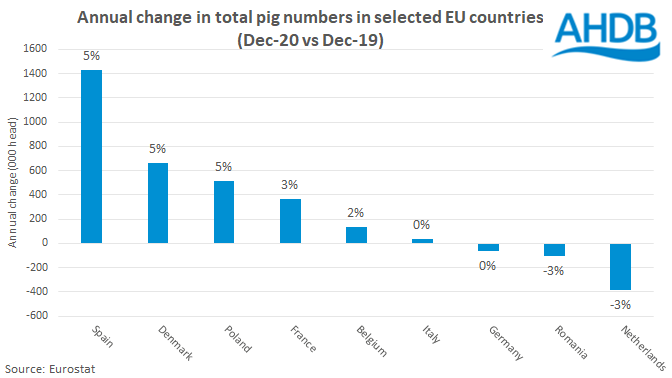 Denmark’s pig numbers were up by 5% (663,000 head) on the previous year in the census, likely due to fewer pigs being exported to Germany. The German pig herd saw marginal declines, with just 65,000 fewer pigs than the previous census – the lack of growth unsurprising following the outbreak of ASF in the country.

The Netherlands felt the largest year-on-year decline in their pig herd with a reduction of 383,000 head (-3%) in the wake of environmental regulation and government incentives to exit pig farming. 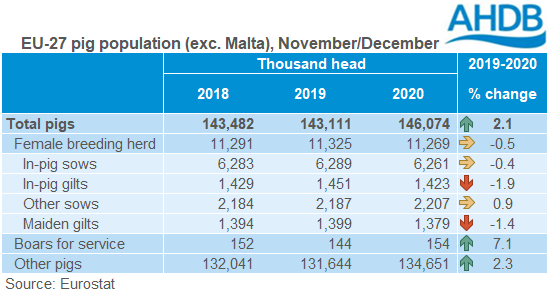 “Despite the total number of pigs in the EU-27 (ex. Malta) increasing by 2% year-on-year in 2020, this increase was due to fattening pig numbers, and many of these will have been slaughtered by now,” aid Mr Reeve.

“By contrast, the female breeding herd declined marginally year-on-year. Sow productivity does typically increase each year, and so this small decline in sow numbers may not tighten finished pig supplies much in the medium term, if at all. However, the decline in gilt numbers could suggest further breeding herd decline might be on the horizon, affecting longer-term pig supplies.

“Any tightening of pig supply in the EU is likely to help support future prices. However, there are many other factors also influencing prices, including the extent of rebuilding in the Chinese pig herd.”