“With this difficulty resolved, further price growth has become more difficult,” she said. “The German market is a major signpost for trends to come in the overall EU price. For the past few weeks, the VEZG recommended price for German pigs has been stable, suggesting recorded growth in average prices may ultimately stall in the coming weeks.” 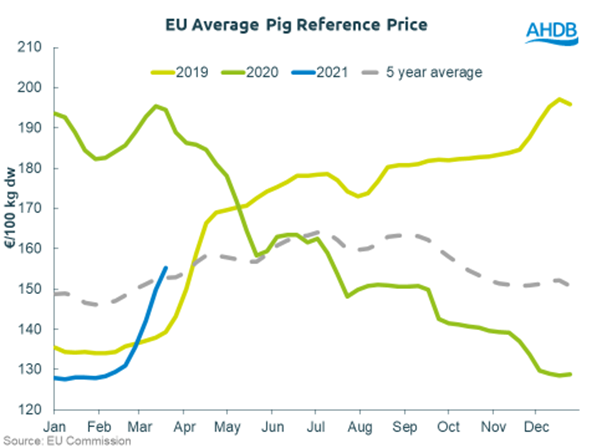 In relation to sterling, the rise in EU prices has been slackened by the strengthening of the pound against the euro. The latest price, therefore, is equivalent to 133.07p/kg, 19p up on four weeks earlier.

The gap between the EU and UK price has declined significantly to 8p/kg (for the  week ending 21 March), having been nearly 26p four weeks earlier. The latest difference is the smallest since last April and could support prices here in Britain by reducing the potential for pressure from imported pork.

Ms Wilkins added: “The rise in EU pig prices has largely been driven by increases seen in German and Dutch prices. Both these countries face declining pig herds, so this is perhaps not surprising. Spanish quotes have also risen strongly, driven by export trade with China. Although French and Danish prices have also increased, these rises were more modest than those in other member states.”