The British Saddleback, Gloucestershire Old Spots, Large White, Oxford Sandy and Black and Welsh breeds are considered ‘At Risk but with an improving outlook for their survival well into the future’.

The new Watchlist, which can be found at www.rbst.org.uk and below, has been published in a fresh format to clearly show Priority and At Risk breeds, reflecting growing recognition among farmers and smallholders of the commercial potential and environmental importance of the UK’s rare breeds of livestock and equines.

RBST works across the UK to save and safeguard the future of rare and native livestock and equine breeds, and its Watchlist is the annual situation report for these breeds.

The outlook for many of the UK’s rare native breeds has remained broadly unchanged, thanks to continuing interest from new breeders, the commitment of dedicated Breed Societies, conservation programmes at the 25 RBST-accredited farm parks, and generous public support for RBST’s wort, the Trust said.

However, the Watchlist also shows that there remain a significant number of Priority breeds where the outlook is of particular concern, with ongoing trends of very low populations as well as lack of genetic diversity.

RBST Chief Executive Christopher Price said: “Farming with rare and native breeds has become increasingly attractive over the past few years, as consumers place a premium on great tasting, locally sourced meat that is kind to the natural environmental and based around high standards of animal welfare.

“At the same time, we have seen Government policy starting to reflect the value of our native breeds to maintaining our natural environment and promoting biodiversity.

“The new Watchlist more clearly shows a number of breeds which are At Risk but with an improving outlook for their survival well into the future, including Traditional Hereford cattle and British White cattle, Oxford Sandy and Black pigs, New Forest ponies, Bagot goats and Golden Guernsey goats, Leicester Longwool sheep, Boreray sheep and Greyface Dartmoor sheep.

“However, there are breeds in all our livestock and equine categories which remain a Priority and we are working closely with Breed Societies and RBST-accredited farm parks to improve their position with vital conservation programmes.

“Last year’s births were largely the result of pre-pandemic breeding programmes so we will be keeping a very close eye over the coming months on the impacts of last year’s restrictions, particularly on the equine breeds.” 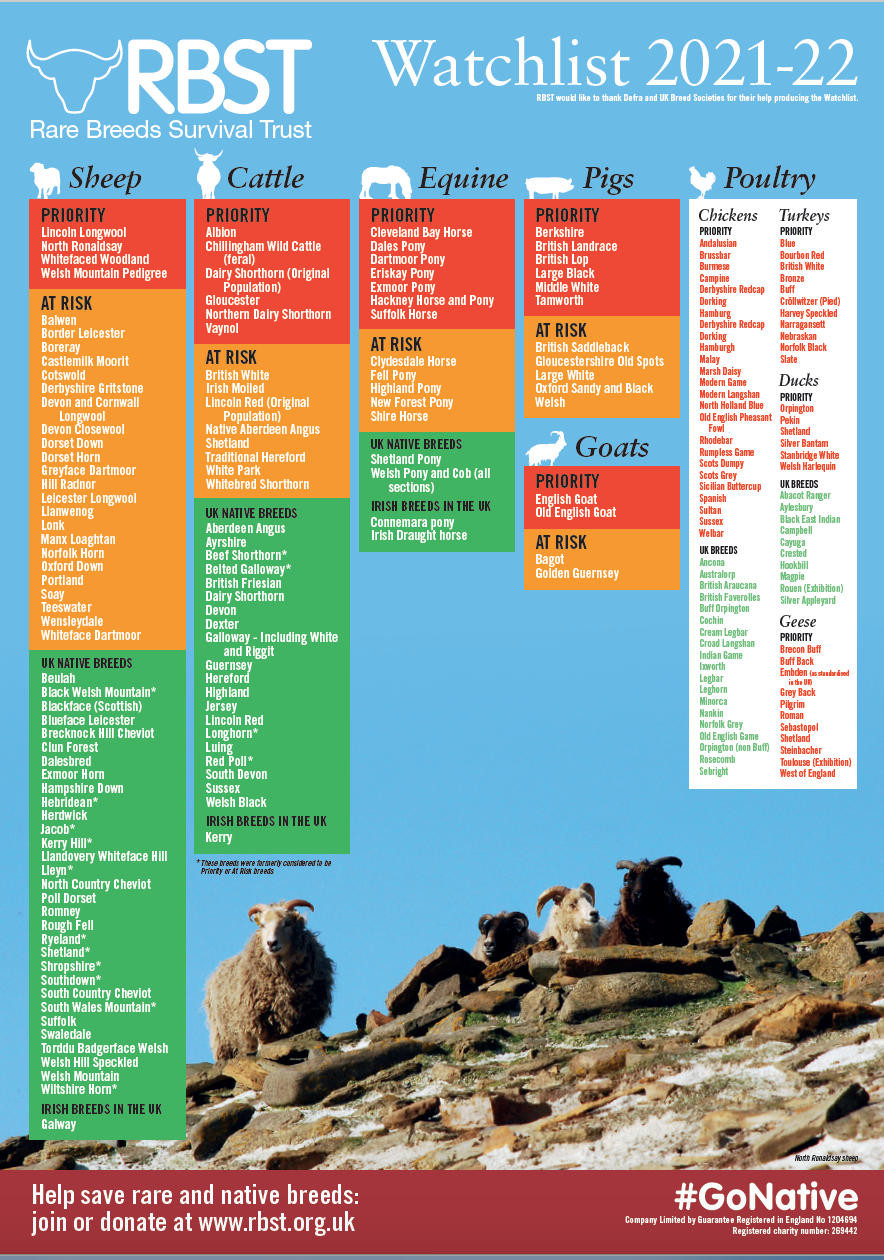