Recovery from the effects of PED is also projected to result in a rise in pigmeat production in the US, while the Americas, Brazil and Canada are also set to increase output, stimulated by reduced feed costs. Steady growth is also anticipated for Mexico, underpinned by improved genetics and productivity.

“Production in the EU is expected to continue the expansion seen last year,” states the report. “As a reflection of this, the year-end breeding sow herd increased for the first time in several years.”
In relation to the Russian Federation, the report comments that government policies favouring large-scale farms have resulted in production doubling over the past decade.

“The trend towards increased output may be amplified in 2015, following prohibitions of pork imports from the EU and Canada, which together supplied two-thirds of Russian imports before the ban was introduced,” it is stated. 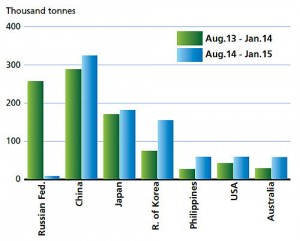 On the question of international trade in pigmeat. the report concludes this is “expected to recover by 1.6% to 7.1 million tonnes in 2015, following a decrease in the previous two years”.

“The US, EU and Canada account for four-fifths of the world pigmeat exports.” it is stated. “Adding Brazil and China to the group brings the total to more than 90%, with expanding production in the main exporting countries being anticipated to be the main driver behind export growth.

“Abundance of supplies on the world market was reflected in the movement of the FAO Pigmeat Price Index which, after reaching an historic peak in June 2014, had fallen by 37% by April, reaching a level last seen in January 2011.

“An additional factor in the weakness in pigmeat prices was the country-specific import ban introduced by the Russian Federation, which particularly affected sales from the EU. Initially, EU pigmeat exports were redirected to Asia, in particular Japan, the Republic of Korea, China and the Philippines. However, towards the end of 2014 and into 2015, demand from these markets slackened and sales declined. A fall in exports increased supply to the EU domestic market causing internal prices to drop substantially.”

Lower international prices for pigmeat are anticipated to serve as the principal motor of trade growth with China, Mexico, the Republic of Korea, Vietnam, Australia, Angola, Singapore and Colombia all forecast to increase imports. Meanwhile, expansion in production in the United States, Japan and the Russian Federation is anticipated to lead to lower purchases this year.