The UK harvest has been well underway throughout August and the outlook for a large cereal harvest has been confirmed. Although there is still some way to go until harvest 2019 is complete, it is unlikely that prospects will alter dramatically towards the end of harvest.

As a result of good prospects, grain prices have dropped.

The release of the USDA supply and demand estimates (WASDE) report in early August revised figures for US cereal crops, pushing markets lower. US corn (maize) production was revised up, at 353.1Mt, well above trade expectations.

Barley usage in animal feed production (compound and integrated poultry units) increased towards the end of the season (July – June), up by 12% from May to June 2019. This is up 23% compared to June 2018.

Wheat usage also increased from May to June (18%) whereas Maize only increased 3%. Imported maize is still relatively expensive compared to UK feed wheat or barley which could support demand for domestic grains. However, if maize prices continue to fall it could become more competitive and increase its presence in animal feed rations. 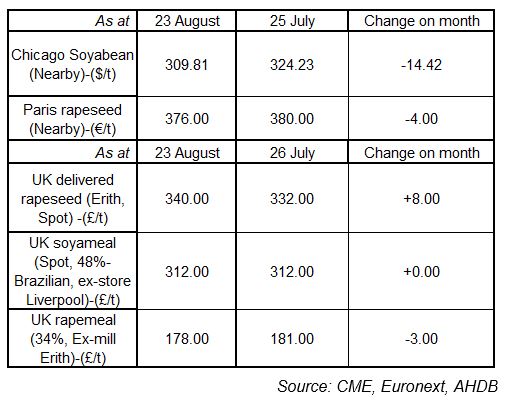 Both UK and wider European oilseed rape production is significantly down year-on-year. The latest USDA WASDE estimates EU production at 18Mt, the lowest since 2006/07. This supply outlook, along with some currency support has seen physical UK oilseed rape prices (delivered into Erith, November) rise by £8.00/t since the end of July, to £349.50/t on 23 August.

The USDA WASDE reported US soyabean area and ultimately production below trade estimates but the market reaction was short lived. Despite lower 2019/20 production estimates, old-crop stocks remain large. With no resolution between china and the US, trade is slow and high carry-out of old-crop is looking likely.

The value of sterling against both the euro and the US dollar continued to drop to long-term lows into early August. Since then sterling has strengthened somewhat, to slightly higher than the start of the month. The low value of sterling has meant UK pricing is seemly competitive an export market against other grain producers. This has supported UK physical prices.