Brexit was, in the end, the big story that never happened – but it will in 2020, initially in the form of a transition period, but with the harsh reality of a no deal exit potentially looming as the year goes on.

But African swine fever (ASF) was the really big story. The huge pig herd losses sustained in China and other south east Asian countries during 2019, accounting for a quarter of the world’s pig herd, according to estimates, has transformed the global pork and wider protein markets, with the benefits eventually feeding through to UK prices in the latter part of the year. The impact, which for a long time appeared to get lost in the complexity of UK pork supply chain, has, however, ultimately masked steadily declining UK and EU pork demand.

Meanwhile, the threat of the ASF virus, itself, which reached Germany’s doorstep in December, looms large over the entire global pork sector.

The timeframe for the recovery of the pig herd in China and neighbouring countries is central to the global and national pork outlook.

China’s pig herd, typically numbering about 440 million, is estimated by Rabobank to have declined by 55% in 2019, with an even larger decline in the sow herd. Pork production is estimated to be down by about 25%. 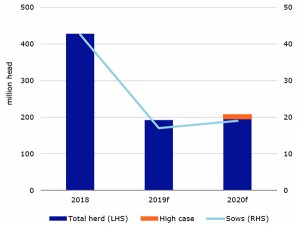 The decline of China’s pig herd may stop in 2020

Despite China drawing down on its frozen pork inventories and fast-tracking trade deals and plant approvals around the world to fill the huge gap, Chinese pork prices have reached record levels, more than doubling year-on-year in the fourth quarter, fuelling inflation. Although there was a drop off in November, Rabobank predicts prices could go even higher in early 2020. 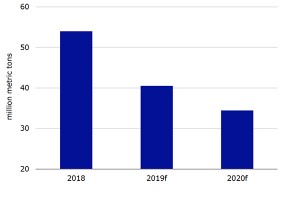 Herd recovery is a massive priority for China and, in December, the Ministry of Agriculture launched a detailed three-year action plan to ‘accelerate the recovery and development of pig production’.

The immediate goals were to curb the decline in pig numbers and stop the soaring pig price before the end of 2019 and ensure the pork market stabilised during the Chinese New Year (January 25). The plan is then to recover production capacity to near to the yearly average by the end of 2020 and achieve full recovery by 2021.

Some big pork companies have already started to restock, backed by Government, but with mixed success due to the risks of re-infection. Small farms, which account
for nearly half of China’s pork output, have generally been wary of restocking due to disease risk and a lack of capital.

Under the plan, there will be support for large-scale farms in the form of grants for construction and machinery, policies to secure land, insurance and more. There will also be support for small farms, including linking them up with large farms.

However, most experts believe recovery is still a long way off. Rabobank expects further herd decline in the first half of 2020, but as ‘aggressive’ restocking and investment gathers pace in the second half, pig numbers could end up slightly higher by the end of the year, at best by 8%.

However, given the low inventory of sows and the fact that many gilts are being kept for restocking, allied with the ongoing impact of the disease, it expects pork production to decline by a further 10% to 15% in 2020, in stark contrast to Chinese aspirations.

In fact, Rabobank is predicting that it could take until 2025 for full recovery, with the herd unlikely to reach pre-August 2018 levels even then, as alternative protein sources permanently muscle their way into the marketplace.

The European Commission has produced two scenarios for China’s ASF recovery, the best case being production reaches pre- ASF levels in 2025, and continues growing to 2030. In the slower recovery scenario, production does not fully recover by 2030.

Meanwhile, the virus continues to spread elsewhere in Asia. In Vietnam, production declined by an estimated 21% in 2019, with around 7.5m pigs lost, and a further 8% productivity drop is forecast in 2020.

The Philippines could see a 13% decline in its herd and an 8% drop in productivity in 2020 according to Rabobank estimates. South Korea lost 430,000 pigs in 2019, while Indonesia appears to be on the verge of a major outbreak.

GLOBAL TRADE
The huge surge in Asian imports was cited as a major factor in a 10% year-on-year rise in the United Nations’ global food index in November and a 4.6% leap in the meat price index between October and November, the biggest month-on-month rise for more than a decade. It is not just pork – the global prices of other proteins have also soared.

Rabobank is forecasting that the trend will continue, with record Chinese pork imports in 2020 and the US, Canada (now free to export to China again), Brazil, the UK, Spain, Germany, the Netherlands, and Italy among those set to benefit. Increased import demand from the likes of Vietnam and the Philippines will add to the competition for imports.

A thawing of US-China trade relations suggests China is preparing to open its doors to more imports from the US. The US has certainly been gearing up for an assault on the global pork market – production is forecast to rise by a further 4.6% in 2020.

But elsewhere, exports are predicted to rise without increases in production, notably in the EU, where exports are forecast to reach a new high in 2020, supporting high price levels.

However, Rabobank has warned that the entire global pork sector will lose out if high prices cause a permanent consumption drop. “Some market participants are struggling to find a sustainable balance between the near-term margin opportunities of higher exports and support for longer-term customer partnerships.

“We expect instability in markets until this balance is found,” it said.

The recent surge in UK plant approvals for Chinese export, including lucrative access for trotters, is adding to a brighter outlook. Tulip’s agricultural director Andrew Saunders told US news outlet CNBC that he expected the growth to continue into 2020. Tulip’s plants that export to China have seen increased sales of around 80% year- on-year, he said.

Cranswick revealed that its total export revenue was up 65%, with Far East export revenue almost doubling, when it reported a 3.6% rise in pre-tax profits to £47.6 million in the six months ended September 30.

The Chinese Government is desperate to stabilise Chinese pork prices, which have rocketed on the back of the ASF crisis

According to AHDB’s 2020 outlook, this was partly due to high EU pig prices, linked to falling production and ‘real and anticipated export demand’. “UK prices were slow to react, for both fundamental and technical reasons,” the report said.

Prices have picked up, however. The mid-December SPP of 162p/kg was 19p up on a year ago and 20p above the five-year average.

2020 PROSPECTS
The upward trend in UK pig prices is expected to continue in 2020, driven by the export market. “If the UK’s price relationship with the EU returns to normal, then imports could recover. If not, imports will remain suppressed,” AHDB’s report said.

The big unknown is the extent to which Chinese demand will directly compete with our domestic demand. If China ‘outbids’ UK domestic prices, the report asked, how will UK retailers respond?

“In more usual times, UK production growth would be expected either to displace imports, or allow for export growth – or, because of carcase balance, a combination of the two. In the current climate, it is far easier to see how the UK’s pork sector will respond to increasing Chinese demand as an exporter, than as an importer competing for EU product,” the report said.

Overall UK pork exports increased by an estimated 9% in 2019, with further expansion of 6% forecast for 2020. The forecast also allows for a slight recovery in UK imports of 5% in 2020, following an estimated 9% fall in 2019

In the context of Brexit, this forecast assumes business as usual access to European markets in 2020 and beyond, although this is difficult to predict with any certainty, given current Government policy.

The sharp drop in imports has meant supplies available for consumption on the domestic market have been noticeably lower this year than last. However, domestic demand has continued to fall – sales of fresh pork, bacon, sausage and ham were all down year-on-year during the autumn, Kantar data shows. This limited the upward pressure on pig prices.

Supplies are forecast to recover a little but will remain low by historical standards. But with the growing export market increasingly competing with the falling domestic market for the same products, the 2020 price outlook is good, although there is a risk of shorting the UK market, AHDB is forecasting.

Cost of production
Pig producer margins moved into the black for the first time since early 2018 in the third quarter of 2019, as falling costs and rising prices saw the typical producer earn £7/pig. Margins were expected to have improve further in the fourth quarter.

Looking into 2020, with pig prices likely to continue rising, the release of the UK cereal supply and demand estimates highlighted the high volumes of wheat, barley and oats available on the back of a good 2019 harvest. According to AHDB, this will limit the impact of the wet autumn and delays to domestic drilling of winter crops, which saw cereal prices firm at the end of 2019.

As for the global picture, soya prices remain steady due partly to reduced Chinese demand and US- China trade tensions, while maize prices have been under pressure due to increased global supplies.

However, the thawing of US-China relations and likely increased demand from China could contribute to an upturn in the global markets for soya, maize and cereals in 2020.