“Fundamentally, these technologies present exciting options for the future of livestock production and could improve animal well-being,” Dr Lewis said. “Once it is developed, we hope to be able to use it to minimise certain diseases such as PRRSv, which will benefit both farmers and the pigs.”

What is CRISPR-Cas9?
CRISPR-Cas9 is a technique that already has various applications in human medicine, plant and animal breeding and research.
Gene editing differs to genetic modification in that rather than inserting new genetic material from a different species into a genome (the complete set of genetic material in a cell or organism), the process is used to alter, or ‘edit’, a plant’s or animal’s existing DNA.

The Cas9 protein acts as ‘molecular scissors’, targeting a specific point on the genome, guided by RNA, and then cutting it open. The cell’s natural DNA repair machinery then corrects the break and introduces the changes to one or more genes.

In this way, scientists can precisely remove, add or alter sections of the DNA sequence and therefore ‘turn off’ or alter the genes that determine the characteristics of the plant or animal.

Tackling PRRSv
In December 2015, PIC announced that, in collaboration with the University of Missouri, it had produced pigs shown to be resistant to various strains of the PRRS virus. PRRSv is one of the most damaging pig diseases in the world, estimated to cost North American producers alone around $600 million a year and a growing problem in the UK.

Using the CRISPR-Cas9 technology, the university was able to breed pigs that do not produce a specific protein that is necessary for the virus to spread in the animals. When exposed to the virus, the PRRSv resistant pigs did not get ill and continued to gain weight normally. These are early days – PIC expects this will take at least five years to develop, if not longer, and potentially bring to market.

Dr Lewis said: “We will go through a thorough process to validate the technology and will engage with regulators in multiple different geographies with the aim to have animals available to farmers in some parts of the world. This process will take at least five years.”

“As well as the obvious disease, cost and animal well-being benefits, this could also reduce utilisation of antibiotics because there will be fewer sick pigs.”
Separate research funded by Genus PIC is under way at the Roslin Institute in Scotland, where scientists are using gene editing techniques to produce pigs potentially resilient to African swine fever (ASF), a growing threat to EU pig producers.

They have created a version of a gene usually found in warthogs and bush pigs, which they believe may protect pigs from ASF infection.

Political challenges
While the technology could offer significant benefits in a number of areas, scientists involved in gene editing techniques in both plant and animal breeding are aware of the challenges they face in getting products to market.

The EU’s antipathy towards technologies like GM crops and animal cloning is well established and plant scientists are keen to avoid a similar story with gene editing.
Scientists at plant research institutes such as Rothamsted, in Hertfordshire, see huge potential gains from the technology in speeding up the breeding process and developing new traits – but have expressed concerns this would be stifled if the technology was classed as GM.

Some plants bred using gene editing techniques have already been classified as non-GM in parts of the world, including the US and Canada. The European Commission is in the process of developing an EU legal stance on the technology in plants, including whether it should be defined as GM, but a long-awaited position statement has yet to see the light of day.

The UK has been supportive of the technology but other member states have expressed concerns. NGOs are on the case, claiming the technology is no more than ‘GM by the back door’ – and should not be allowed.

Brexit complicates the picture further. We don’t know whether a post-Brexit UK would be in a position to develop its own regulations on gene editing in plants and animals – or would have the desire to do so, given the political sensitivity and trading implications.

Either way, many involved in the UK science and agricultural sectors are keen to avoid a situation where other parts of the world benefit from a technology denied to farmers in the EU.

When it comes to the livestock sector, Dr Lewis stressed that the science supported the safety and integrity of the technology from a biological point of view.
“The process is being refined at a rapid rate and there are research endeavours going on at various places in the world,” he said.
“We believe that gene editing is fundamentally not the same as creating a GMO.

“It is important that, as we develop this technology, we also go through a responsible regulatory approval process and enter into full engagement with consumer groups.”
The possibility of deploying the technology in Europe would boost the competitiveness of the European livestock sector, given its high dependence on exports, and reduce the environmental footprint of pork, Dr Lewis said.

He added: “Education is going to be key. We have to be positive and proactive in communicating to the consumer and working with stakeholders and regulators.” 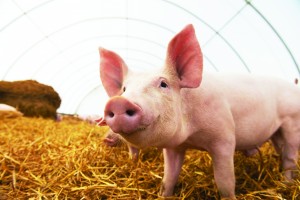 How PIC is embracing the genetic revolution
PIC is already taking full advantage of scientific advances in understanding of the genome.

In autumn 2013, the company introduced the Relationship-Based Genomic Selection (RBGS) breeding programme across all its lines.
Under the programme, every male selection candidate at the nucleus herd level is genotyped to provide a much fuller understanding of its genetic make-up and what traits it is likely to pass on.

Previously, breeders relied on the assumption that piglets inherited half their genes from each parent and shared half their genes with other pigs in the litter. In reality, there is significant variation in their genetic make-up, which RBGS is now able to identify.

“We use it for every trait that makes up our breeding index and the extra accuacy it brings means the rate at which we can make genetic improvement is now 35 per cent higher,” Dr Lewis said.

PIC’s breeding programme, which represented a ‘huge investment’ by the company, is designed to produce ‘balanced selection that provides the most value and the most profit’, Dr Lewis added. “We aim to get the maximum number of piglets to the slaughterhouse, so robustness is a key trait from wean-to-finish and pre-weaning.”

There is more to come. In November 2015, PIC started a collaboration with the Roslin Institute, in Edinburgh, to fully sequence the genome of more than 14,000 pigs.
When full sequence information is available from the 3 billion nucleotides on a pig’s genome, PIC is confident this will drive even faster genetic improvement.
“It is an exciting time to be in pig breeding,” Dr Lewis added.

About PIC
PIC was formed in 1962 by a small group of Oxfordshire pig farmers who were concerned traditional purebred breeders were not producing the right pig for future markets.
A subsidiary of biotechnology company Genus since 2005, it operates in 30 countries, spanning six continents.
It owns 11 pure-bred pig lines developed in two nucleus herds in the USA and Canada and more than 300 predominantly sub-contracted multiplication units around the world.
More than 120 million slaughter pigs produced each year contain PIC genetics.