While his original course was very general, as his intention was to return and work full-time on the unit where he’d got his start in farming, the decision to stay on at Writtle to study for an Honours Degree in Agriculture resulted in Darren’s introduction to pigs. The final year of his course demanded a trial and dissertation, and the college’s pig unit provided the perfect opportunity for a suitable topic.

Working with three batches of pigs, as he collected data to look at the relationship between their birthweight and their whole-life performance, he developed a real taste for working with them. Visiting a few pig farms with college only added to his interest.

Just two weeks before he was due to leave Writtle, a job was advertised on the college noticeboard that Darren couldn’t resist; he applied, and in June 2012 moved from full-time education into a full-time role with Pitts Farm’s 220-sow herd near the Essex village of Good Easter. Joining the unit with little experience, the first three months were mostly spent pressure washing on the unit, which operates a three-week batch farrowing. That soon changed, however, when two staff left in September that year, leaving just Darren, the pig unit manager and owner Guy Pitt to run the unit.

With farm staff hard to find in rural Essex, and the extra effort required in working on this predominantly straw-based system making that process even harder, Darren has been given every opportunity to progress. He immediately got involved in farrowing and serving, and this remains his favourite parts of the job.

Training has been central to his development from the start, and Darren has been through AHDB Pork’s Stockman and Stockman Plus training, and in both cases he has been able to bring things he learned back to the herd.

“After the Stockman training I changed how the sows were treated post-service,” he says. “Sows are now kept in the service area for six weeks after serving instead of three before. As a direct result, we have been able to increase the four-week conception rate from a three-year average of 74% to the latest three-year average of 86%.

And the Stockman Plus course allowed him to improve the farm’s pre-weaning piglet management.

“On return from training, I was able to implement a fostering programme to make up more even litters,” he adds. “This helped us to manage our mortality rate, even though we had an extra 1.5 piglets born – although we’re still working at improving our mortality rates.”

As a multiplier for Rattlerow Farms, producing gilts for five regular customers, Darren has also had the opportunity for some bespoke training from James Brice at Countess Wells, another National Pig Awards winner. This allowed him to look again at fostering, and in particular the treatment of small piglets. 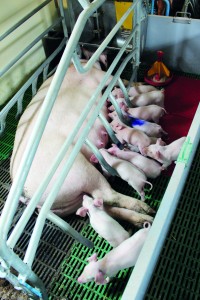 Darren says that taking part in local AHDB meetings shouldn’t be underestimated as a source of new thinking that can be brought home and put into practice, and the same goes for farm visits. He took part in an AHDB visit to the Netherlands to look at sow performance and was able to report back to Guy Pitt about the success of fully slatted farrowing accommodation and ad-lib feeding of nursing sows.

“Compared to the solid floor farrowing accommodation that makes up most of the spaces, slatted floors decreased the amount of labour required for shovelling, and increased the time for caring for the sows and piglets,” Darren says. “As a result, Pitts Farm was able to make an informed decision on investing in Finrone mobile farrowing buildings.”

Darren welcomes all the training opportunities he has been given and admits he has progressed in leaps and bounds, having joined the unit fresh from college.

“With the support of my employers, I have moved from a young stockman into a more mature, well-rounded stockman,” he says. “I took on the management of the farrowing house and since the end of 2015 I have been manager of the whole pig operation.

“I have taken great pleasure and satisfaction from improving myself and the farm. I can’t wait to continue my development further, putting into place more ideas.”

At just 26, Darren is still in the early part of his career, and while he has ambitions, he’s content where he is at the moment.

Guy Pitt will also be pleased to have Darren around for a while yet, and says he has brought new energy to the unit, which was established in the 1950s.

“Darren brings new ideas, thoughts and concepts to the farm that are logical and practical. He understands the business and is a real asset,” he says. “Darren came to us at a very crucial time for our business. His drive and energy has reignited my love of pig farming at a time when our business could have taken a turn in either direction.” 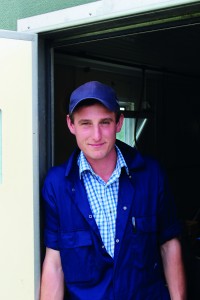