This will need to change as consumers become more inquisitive about how their food is produced, according to AHDB Pork chairman Meryl Ward, who attended the event, which was sponsored by Sainsbury’s and the Scottish Funding Council.

She summarised the current state of play as a ‘triangle’, with consumer perceptions, the limited science and economic considerations throwing up a complex mix of opportunities and barriers.

“Consumers are becoming less accepting of farrowing crates,” Mrs Ward said, a perception frequently being reinforced by the focus on sows being confined in this way by animal rights campaigners.

“If you explain the farrowing crate to consumers, most would get why it was there but they would question why, in 2016, we cannot come up with something better to deliver the same outcome.” 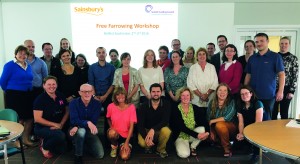 She highlighted some encouraging findings from the workshop, such as the benefits of providing substantial nesting material pre-farrowing on piglet health and higher weaning weights among free-farrowed pigs, possibly due to reduced stress or easier access to teats.

But the science is only partially down the road to resolving the issues associated with free farrowing, the biggest of which is the varying maternal proficiency of sows.

Research has shown, in typical pig herds, many sows are capable of farrowing safely and effectively in free systems – but a proportion, in some cases up to 50%, are not and are unaware they should not sit on the piglet.

“This lack of maternal instinct has been masked by farrowing crates, which has meant breeding companies and farmers, when they select replacement gilts, have not had to take it into account. This needs to be addressed,” Mrs Ward added.

Then there are the economics of free farrowing and the need for more space, which is where Mrs Ward insisted the supply chain should take its responsibility.

Crates traditionally cover about 4.5-5sq.m per sow but non-confinement systems will necessitate ‘anything upward of 6-8sq.m depending on the system’.

A lack of recent investment means the average age of UK pig buildings is 22 years. Farmers need, not only the certainty that what they are doing will work, but a financial incentive to make the investment, Mrs Ward said.

The removal of the Agricultural Buildings Allowance has taken away the tax incentive to invest in this way and retailers are showing no inclination to pay more for pigmeat from these higher welfare systems, she added.

“Like the first free range system, the key is to reach a critical mass in the marketplace where it becomes easier. We have got to overcome the practical problems and make it affordable but at the moment there is no commercial incentive to do it,” Mrs Ward said. 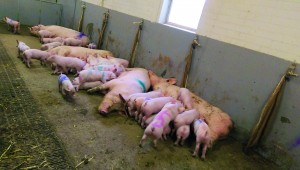 “That has got to change and the supply chain has got to step up. Like it or not, the perception of animal welfare has changed and it would be completely wrong to put our heads in the sand and think this is going to go away.”

NPA head of policy services Dr Georgina Crayford said the workshop was ‘extremely informative’, highlighting the many alternatives to traditional farrowing crates being explored around the world but also the many challenges, led by piglet mortality.

“Experience of staff seems to be crucial to the success of free-farrowing,” she said.

“It is difficult to demonstrate the commercial viability of these system and our concern is that retailers will not be prepared to offer a premium for pork produced in free-farrowing systems.

“If the expectation is that free-farrowing will simply become the norm across the industry in the drive to improve welfare, but without the loss of performance, the question then is: Who will pay for it?

“Government funding for new buildings or subsidies to farmers to switch to free-farrowing, which are available to farmers in other countries, would help enormously.”

Full proceedings from the workshop will be posted at www.freefarrowing,org