All of their new staff receive induction training, which covers health and safety sessions, key policies and procedures and pig health. After settling in, staff get ‘on- the-job’ training from more experienced employees, followed by starting a City and Guilds Level 2 Pig Husbandry Certificate of Competence.

“Recruiting new, young people to the sector is the way the industry moves forward,” said Helen. “Agriculture has a very ageing population, after all. I have a training background that’s nothing to do with agriculture and therefore feel very strongly that the way to secure the future in an industry is to train the up-and-coming generation and give them a stake in that future.” 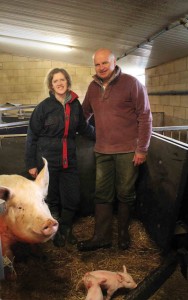 When deciding on their winner, the award judges noted the business was ‘fantastic and motivated’, with a strong commitment to, and investment in, training. “There is a raft of options for personal development with a great offer of training for staff,” the citation observed last year when the award was given out.

The thorough approach to training started around six years ago, in response to taking on several younger members of staff. “We’ve tended to take on younger staff who haven’t had previous pig experience,” said Helen. The farm also grew in size, with a second site taken on in 2010. “Obviously that increased the number of staff we had by quite a few,” she added.

Staffing has been difficult, so they feel having a thorough training programme makes sense. They now advertise for staff online, which works reasonably well, although it’s often tricky to get the right people at the right time, and they have previously had to look outside the UK to get the number of people they need.

“It seems to be a constant battle to find the right people with the right work ethic, the right physical fitness and the right attitude,” she said. “We did go through a period of having quite a few foreign staff, and we did employ a number of people – this is going back 10 years or so – who were from Latvia, Lithuania, Poland, and, although that was OK, the language became quite a barrier.

“So we really then moved to taking on people who were younger and with less experience but were willing to train. When you get young people coming in, however, you have to invest in them and give them the incentive to progress.”

Reflecting on their 2017 Investor in Training Award, the couple hope it might encourage others to focus a little more on training.

“There is always a danger in business that there are people who train and people who poach,” said Helen. “In reality, we all need to be in there providing training for staff and helping the whole industry to develop and prosper. Training is an industry- wide need. In fact, if businesses in general don’t train their staff there will eventually be nobody out there for them to employ.

“As an industry, we need people to fill a wide range of jobs and it’s going to become more difficult in the future for pig farmers to find the right staff.”

Additional one-off training courses, such as rodent control or first aid, are also provided, while those who wish to seek higher qualifications are given every chance to do so. And the Bodmans have gone above and beyond in other areas too – even paying for chiropractic treatment for a member of staff who had a bad back.

All staff also have a performance review between three and six months after joining the business and an annual appraisal thereafter. This allows them to discuss their performance and identify new areas they want to learn about.

Section assistants, meanwhile, are assessed regularly to see when they might be ready to experience the main responsibility for the section, as other team members either move on or transfer to a different role.

All new starters have a full induction in their first month. “That covers not only things like general policies and procedures but the key diseases on farm, how they’re treated, health and safety and terms and conditions,” added Helen. Then once they’ve been in the post for six to eight months, more thorough training begins.

Helen conceded that there are challenges to having such a high quality training programme, the main one being time. “Every time you have someone on a training course, you’re filling in behind them,” she said. “And that is a challenge when you have two sites and not that many staff.”

Occasionally, staff have decided not to complete a training programme once they’ve started it, which can be frustrating, Helen admitted, as can losing staff to other companies after the investment in training has been made. But it’s important to be pragmatic, she stressed.

“I think it’s good for staff morale and it makes them feel they’re having an investment put into them,” she added. “When that works, it’s great to see.

Unfortunately, of course, you have to be a bit holistic because staff who you have trained can move on. Now, obviously, that training has been of benefit so it’s not training that’s wasted in the pig industry, but it can be a bit frustrating.”

Looking ahead, Helen and James are focused on continuing to build the business, in a steady way. “We are growing our second farm,” Helen said. “It’s got potential to grow slightly more, but it’s not dramatic so I can’t see us increasing our staffing levels for some years, so we’ll pretty much stay as we are for some time. But we want to show we are a good employer and we want to keep the staff that we have.”

Helen was persuaded to enter the National Pig Awards by two separate people from AHDB, who told her she put a lot more effort into training than some other businesses. Despite this, she was ‘very surprised to win’.

“It’s good to know we are doing something well,” she added. “It’s a great credit to my husband because he ends up covering when staff are away training.”