In addition to pig equipment, it has a thriving construction division, making buildings not just for pig producers, but universities and research centres, such as the Royal Veterinary College.

It was an intense interest in working with metal – inherited from his father – combined with a farming background that, from very small beginnings, set Glyn on his path as a knowledgeable supplier of innovative equipment to the pig industry.

He was born in 1944 on the 60-acre Poplar Farm, at Woolpit, Suffolk, where the company is still based. His father had taken on the tenancy of the mixed farm from Glyn’s grandfather, who had moved down from Scotland in the 1930s. His dad worked for the wartime agricultural department and helped farmers – and Women’s Land Army girls – plough and cultivate their land. He received training as a blacksmith and in engineering, which was particularly useful when machinery broke down as it frequently did in those days. 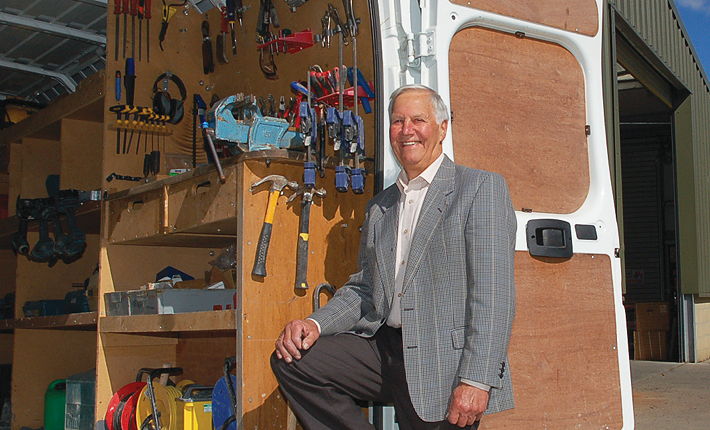 Glyn Baker set up business as an agricultural engineer in 1965

His father was what Suffolk people would call “handy”, having a variety of skills. He worked for a builder – and actually built the bungalow in which they lived – and he also turned his hand to designing and making equipment for his own farm and other farmers.

This was the environment in which young Glyn grew up. The mixed farm had a small herd of half-a-dozen sows and he recalls the villagers walking their sows up the road for service by his father’s stock boar. After attending the village school, he chose an agricultural syllabus at nearby Beyton School, and made a wooden pig ark there – a sign of things to come. Arks are again a familiar sight, particularly in Suffolk, with the resurgence of outdoor pig-keeping.

However, the farm wasn’t large enough to support Glyn when he left school at 15 so, having passed the entrance exam, he enrolled at Rycotewood College, at Thame, Oxfordshire, for a five-year engineering course and apprenticeship – the first year being residential. Quite a shock for a 15-year-old who had never been out of Suffolk, he recalls. But he successfully completed his apprenticeship, spending the remaining four years attending the college eight weeks a year while working for two local engineering firms.

Turning point
A big turning point came in 1965 when, at the age of 21, Glyn got married to Jennifer. Like his father, he decided to build his own home and, to make ends meet while he was doing so, started undertaking contract combining and emergency repairs for local arable farmers. His father made his own welding machine, so this was a great attraction for local farmers.

“It was all very unsophisticated then – a 27ft x 20ft Nissen hut being used as a workshop – but I never actually went back to ‘being employed’,” Glyn says. 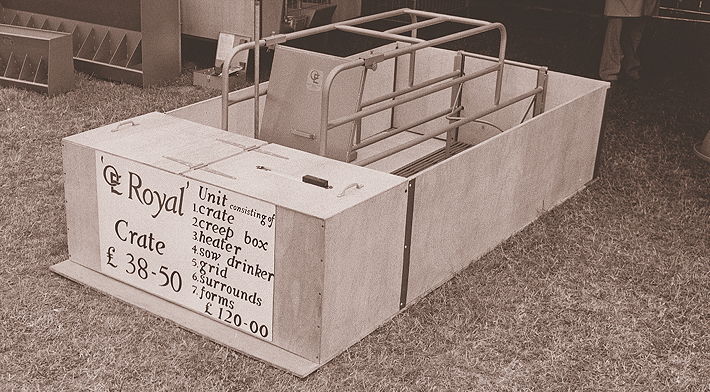 It was in 1967 that Glyn made his first bespoke piece of pig equipment – a farrowing crate. As was the trend then, a local farmer wanted to intensify and needed equipment, particularly crates. Word got around, but Glyn had been trading as a general agricultural engineer under the name GE Baker Agricultural Engineering.

“It was difficult to become recognised as a specialist tradesperson, so I really needed a trade name and Quality Equipment was registered,” Glyn recalls.

The company started advertising under this new name, attended the Suffolk Show and, in 1971, exhibited for the first time at the original Pig & Poultry Fair, which was run by feed firm BOCM at Stoke Mandeville in Buckinghamshire.

This was significant for the company. Not only did it establish the QE name, Glyn made a vital contact. After the fair a German, Arnie Baier, appeared out of the blue at Glyn’s door and asked if would become an agent for the large and influential Continental company Lohmann, that made livestock equipment, particularly feeding systems.

“We had no written contracts – just a gentleman’s agreement, but we had a good 10 years selling both wet and dry feeding systems for pigs,” Glyn says. “It introduced us to new technologies but, more importantly, because of Lohman’s name, size and reputation, this arrangement opened doors for us on the Continent.

“We were introduced to the benefits of imports and exports. We got a taste for Europe and started exhibiting at overseas trade fairs.”

Most advanced
On the home front, things were booming, too. The UK pig industry was one of the most advanced in Europe at that time and was intensifying rapidly. Farmers were mostly keeping their breeding herds indoors at that stage, having been introduced to the benefits of farrowing crates and sow stalls as recommended by advisory services and validated on demonstration farms, such as the NAC pig unit. Better sow management resulted in a 40% increase in sow productivity compared to the early 1960s and pig farming was very profitable. Such was the demand that QE had a 12-week waiting list for farrowing crates and sows stalls, despite employing 40 people at its Woolpit works.

However, a series of financial crises resulted in pig producers losing money and many quit the industry and this, of course, hit QE. The pig industry suffered another blow when, following pressure by the animal welfare lobby, sow stalls were unilaterally banned in the UK in 1999. Pig producers had to change their systems completely to loose housing. This was very expensive and put them at a commercial disadvantage compared with their Continental counterparts. It was compounded by further price slumps and an outbreak of swine fever.

The company had to virtually reinvent itself, but did so very successfully by diverting resources to research and development.

“We took on students and graduates to introduce new technology, which had real economic benefits to both farmers and QE as a result of improved pig management,” Glyn says.

In 1993, a new R&D department was set up headed by engineering design graduate Mark Harding, who is now a director of the company. Of particular note was the development of the automatic Transition Feeder, which helped piglets make the change from milk to solid feed after weaning. This was recognised as a major development, gained a new product award at VIV Europe and went on to sell throughout the world.

Earlier, the company took on the German Nürtinger nursery unit, that was a welfare-friendly, energy-efficient rearing system, particularly for small and weak piglets, developed at the University of Nürtingen, in southern Germany, by Professor Schwarting. Again, this had a big impact with many producers visiting the first farm on which it was installed in Suffolk. QE’s Continental links were strengthened when the company appointed Michael Mattmüller, a graduate of Nürtingen, to provide support for farmers using the system.

The concentration on systems and equipment that would help producers become more efficient paid off. Among these was the introduction by QE of Paneltim, a polypropylene building panel, developed in Belgium, that revolutionised the manufacture of gates and penning in piggeries. The on-farm benefits of space saving, ease-of-construction and hygiene were quickly picked up.

In 2005, Glyn handed over the reins to his sons, with Jamie Baker as managing director and Graham Baker looking after marketing. Glyn and Jennifer remain on the board as non-executive directors, but while he’s there for advice, Glyn insists that all the day-to-day running and major decisions on the future are made by his sons.
“I’ve been fortunate to have the full support of my wife, Jennifer, and family while building up the business, and a very loyal staff,” he says. 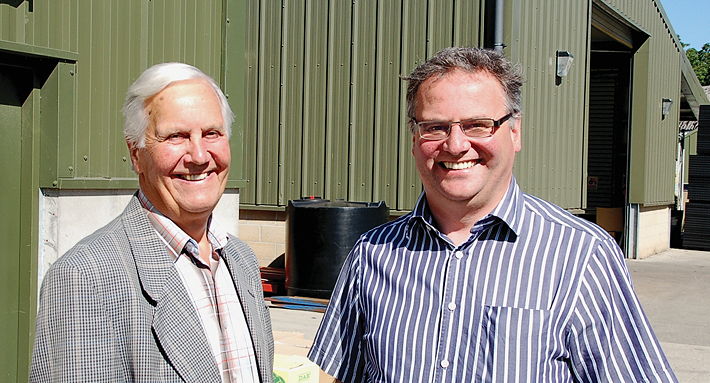 The future for QE
Quality Equipment has invested heavily in new buildings and equipment at its Woolpit base, and managing director Jamie Baker says this will continue.

“It’s necessary to invest for the future in better facilities, improving efficiency and higher stocking of products to give the best possible service,” he says, adding there are plans to install a new workshop and expand the offices by the end of 2016.

The company currently employs a staff of 30 and manufacturing – both steel and plastics – still accounts for 25% for the business. A special plastics division has also been created.

QE currently employs a staff of 30 from its Woolpit, Suffolk base

The construction division started in 2007 and now accounts for 40% of the company’s turnover, while exports have grown to 15%.

Some 90% of the company’s business is with the pig industry and a further 10% with colleges and universities. Jamie Baker sees this continuing.

“Pigs are what we know best – and our emphasis has always been on giving a personal flexible service to pig farmers,” he adds. “Farms are getting larger and there’ll be an increasing demand for turn-key projects.”