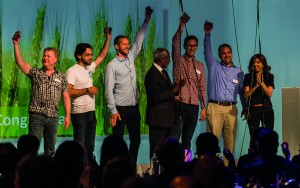 “There is a huge amount of data already being collected on farms via various systems and equipment sensors,” said Trouw Nutrition researcher Neil Jaworski, who coordinated the AgriVision hackathon.

“But it’s not necessarily available to the farmer because the individual bits of data don’t usually talk to each other. This is because the temperature sensor reports to one company, the ventilation system talks to another, with the same applying to data coming from other sources, such as the feed and water intake systems, and so on.

“Thanks to our data donors, however, the hackathon allowed the five teams to access an amazingly detailed six-company data store. “This enabled the programmers to explore countless data correlations and consider a range of solutions, which wouldn’t otherwise have been possible.”

The end result was the delivery of five quite different submissions, unveiled during AgriVision’s final session and voted on by the event’s 400 delegates, only two of which said they’d encountered a hackathon before. 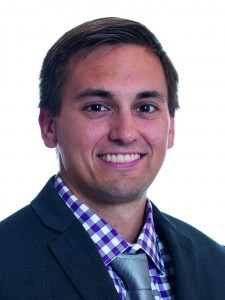 Following the hackathon, Nutreco said it would remain in contact with the five teams and would be seeking to determine which ideas should be further developed.

“The overall goal was to showcase the power of open data-sharing and that was definitely accomplished,” said Mr Jaworski. “It has also opened the way for Nutreco to take a leadership position in the pork industry in relation to the use of open data sharing and the pursuit of ‘big data’ technology.”

A young group of Dutch farmers were also involved in the process, giving practical advice on what, and when, they hoped the hackathon might deliver.

“In addition to helping draw up the challenge areas for the five teams, the farmers also made it clear they were looking for results they could use now, not some time in the future,” Mr Jaworski added.

“We’d started out thinking the exercise could lead to developments the industry could use in five years’ time but one young farmer, in particular, was quite critical of such a timescale.” 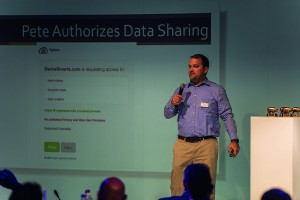 Five possible solutions
1 – Team SwineSmarts’ idea topped the delegate vote. They created an app to simplify on-farm data sharing, while ensuring the farmer retained control of where the farm data was shared. The app was designed to collect all available data from the farm and ‘throw it to the cloud’.
Then, when a feed company or genetics business asks to see a specific piece of data, all the farmer has to do is decide whether or not to give the company access to a password protected data store. If the answer is ‘yes’, the company concerned can go ahead and look for itself, taking over all data transfer requirements.
It’s a lot less time-consuming for the farmer, who only has one decision to make, rather than having to find the data in the first place and get involved in a potentially complex transfer process.

2 – Team Piglantir, the runners up, created a business case to use video imaging within pig pens to identify and track individual pigs; essentially getting rid of ear tags while adding value by continuously generating data from individual pigs.
The team explained that each pig’s snout is unique and could be used as its fingerprint. A continuous stream of data can, therefore, be gathered from each pen, potentially alerting the farmer via a mobile phone whenever pig health becomes sub-optimal.

4 – Team Pig Alert used pig feed intake behaviour to predict growth rates. The team explained that pigs behave differently around the feeder, arguing that an insight into this behaviour may lead to better growth predictions. Team members used their donated data to compare pigs which like to eat two or three big meals a day, with pigs that prefer to consume food via several smaller meals.
The aim was to create an app that detected deviances in pig feed intake behaviour, enabling analysis of any negative impact of this on growth.
The hope is that this will enable farmers to sort pigs into groups with matching feed intake behaviour, potentially leading to improved growth.

5 – Team Porklane developed a website service to connect the farmer with slaughterhouses and retailers in order to produce shorter supply chains.
Adopting the theme of ‘produce, harvest and eat local’, the team analysed geo-spatial data that will enable farmers to make marketing decisions, based on their distance to both slaughterhouses and potential retailers. It was also envisaged that the service will allow retailers and slaughterhouse owners to connect better with farmers, optimising farm-to-retail systems to better meet consumers’ demands and increase production returns.

‘Farmer-friendly’ disruption
The AgriVision hackathon was run by FarmHack.NL, which aims to draw ‘passionate and innovative people together who are committed to disrupting the agricultural sector’.

“That’s using the word ‘disrupting’ in a positive, farmer-friendly way, of course, not in a bad way,” explained FarmHack information officer, Simeon Nedkov. “We specialise in bringing people from different disciplines to work together on problem solving.

“Hacking is also an entirely positive term in our context, as it relates to cracking a problem by accessing different data sources that might not otherwise be brought together, to address problematic issues.
“While there is a massive amount of data available in business today, the challenge is to get an information flow going and to overcome the barriers that prevent the open sharing of potentially valuable data.

“Data donors, as happened during AgriVision, have to buy into the fact that they may be giving access to something they own which may become part of something very successful in the future. That’s obviously a challenge, but being afraid that someone else might make more of your data than you have isn’t going to help deliver the best solutions.
“Frankly, if you haven’t come up with something yourself already, based on your exclusive bit of data, then you probably never will. It’s usually wiser to share the data, embrace the added value that results and then work out how all parties can benefit.

“That’s what open innovation is really about.”