During last month’s Pigs 2022 conference, AHDB updated the pig industry on the science and its role in helping to tackle one of the greatest challenges facing animal and human medical practitioners today.

The research results suggest that bacteriophages (phages) could become another valuable tool in the treatment of bacterial disease in pigs, as part of an holistic approach to health management.

The breakthrough could also help speed up the development of similar applications in human medicine, addressing the rise in antibiotic-resistant bacteria that last year’s O’Neill report suggested could be killing as many as 10 million people a year by 2050 as a result of drug-resistant infections.

Key questions
Are bacteriophages safe?
Bacteriophages are found everywhere in the environment. Humans have them and so do animals. Bacteriophage treatment is about using increased volumes of something that is already present to target harmful bacteria. Research suggests they do not harm other organisms because the relevant receptor is not present.

What about resistance?
Using a combination of phages to treat one bacteria reduces the risk of resistance. The phages found in this study cannot transfer resistance from one bacteria to another.

Why aren’t phages already being used?
Antibiotics have been very effective against a broad spectrum of bacteria but the build-up of resistance has resulted in the use of bacteriophages being investigated again because of their specific mode of action. This specific mode of action, however, can also be seen as a disadvantage because of the need to determine the precise organism causing infection. Therapeutic use also requires the specific mode of infection and genetic sequence to be known. Advances in technology mean that these barriers are gradually being broken down so phages can be considered more seriously in the future.

How well do they work with antibiotics?
Bacteriophages and antibiotics are complementary to each other and work well in synergy.

New science has brought old science right to the forefront in tackling the problem of antimicrobial resistance (AMR). People were using phages to treat bacterial infections more than a century ago but once broad-spectrum antibiotics were discovered, phages were largely forgotten – until recently.

Researchers at Leicester have isolated 20 bacteriophages that target 72 strains of potentially drug-resistant bacteria that can cause gut problems in pigs. To do this, they have developed new, more advanced technology to identify the right phages to use to treat specific bacteria. 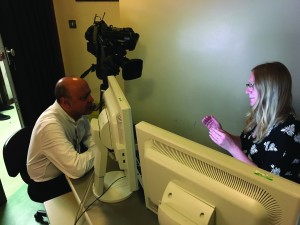 Dr Charlotte Evans, technical senior manager at AHDB Pork, said: “The phages that were isolated were effective against the top five sub-types of the bacteria that cause gut health problems in pigs. They also killed all the antibiotic-resistant strains that were used. More than that, they showed a very quick mode of action, with significant effect within just two hours.

“Bacteriophages are found everywhere in the environment, in humans and animals, so they can be regarded as a ‘natural’ defence. Bacteriophage treatment is about using increased volumes of something that is already present to target harmful bacteria. Research suggests they do not harm other organisms because the relevant receptor is not present.”
Prof Clokie explained that all bacteria have these natural ‘enemies’ that infect and kill them.

“Actually, this is happening all the time in nature. All bacteria are being killed by phages and we can use phages when we want to remove an infection in the same way as you would use antibiotics,” she said. “Wherever bacteria naturally occur in high numbers you can find bacteriophages in abundance, for example in dirty puddles, rivers and soils.

“A bacteriophage can be thought of as a ‘friendly virus’. Using bacteriophages is completely safe; viruses are everywhere and our bodies – and animal bodies – are used to interacting with them. What we’re doing, in a disease context, is using the viruses to kill the bacteria that are causing the disease.”

On the question of resistance, Prof Clokie added: “Phages work quite differently from antibiotics because they are very specific to each target bacteria. So, while over time bacteria could become resistant to them, we know that if we use a mixture of different types of phages that kill a particular bacteria in slightly different ways, we can minimise resistance.

“When the question of where we were going to find our new alternatives to antibiotics was posed in medical journal The Lancet, of the top 10, the top three were bacteriophage-related, so you can see how prominent phages are.”
While Dr Evans concedes that killing bacteria in the lab is different to the on-farm environment, results so far have been encouraging.

“We now looking at the best ways of applying phages – via spray, injection or vaccination, or perhaps by adding to feed or water,” she added. “Once this aspect has been studied, we will have reached the stage for discussions with commercially-minded companies in order to further develop the technology and take it out into the marketplace.
“There’s still a long way to go in terms of trials and licensing but we are very pleased this research, which was started two years ago, has already yielded such promising results.” 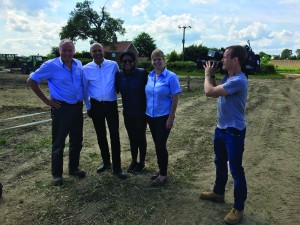 Telling a positive story
Antimicrobial resistance (AMR) is recognised as a major social issue and reputational challenge within the livestock sector.
It’s vital to ensure everything possible is done to increase awareness and understanding by all those involved in order to take appropriate steps in response to the O’Neill report’s recommendations in 2016 to reduce use of certain antibiotics in humans and animals. The practical steps the industry is taking will help consolidate the excellent reputation of the British industry and maintain public confidence.

The BBC reported on Professor Martha Clokie’s work at the University of Leicester in June, featuring interviews with her, AHDB Pork’s Charlotte Evans and pig producer Simon Watchorn on programmes including the 6 O’Clock News, and on Radio 4 and Radio 5 Live. All the press coverage resulted in a potential audience reach of 25 million.

It provided an excellent opportunity to show the pig industry’s proactive approach towards responsible antibiotic use. This is just one of AHDB’s projects across multiple sectors looking at the issue of antibiotic use in animals. Others cover how best to record use accurately, developing best practice and how to reduce usage, where appropriate.

It’s important for the industry to be transparent and communicate fully with the public – often via the media – and AHDB and the National Pig Association (NPA), among others, work closely with RUMA, (Responsible Use of Medicines in Agriculture) to this end.

Around 37% of the UK’s antibiotics are currently used for treating disease in farm animals.
The latest official sales data shows there was a 10% fall in sales of antibiotic products into farming between 2014 and 2015.
To view the Phage film shown at Pigs 2022, go to: http://pork.ahdb.org.uk/news/video-library/