One of the top reasons for sows leaving breeding herds is frame and leg weakness. Many factors contribute to poor skeletal structure, but a major factor is nutrition and the vitamins within the diet. Dietary calcium, phosphorus and vitamin D3 all play key roles in skeletal development.

Feed additive expert DSM is one of the world’s leading suppliers of vitamins, carotenoids, eubiotics and feed enzymes to the global feed industry. It recognises that calcium, phosphorus and vitamin D3 are vital for optimal pig health and productivity, and it has pioneered considerable improvements in the reproductive performance, litter size and feed conversion efficiency of sows through enhanced feed nutrition. One key area the company has focused on is D3, which is a fat-soluble vitamin produced in the skin or supplied in the diet.

Two-step process
When pigs are fed vitamin D3, the vitamin has to go through two steps before it’s available for use by the animal. Step one takes place in the liver, where it’s converted into 25-hydroxyvitamin D3 – 25(OH)D3 – or calcidiol, the major form of vitamin D3 found in blood. This conversion can’t be regulated easily, especially by adding more Vitamin D3 in the feed. Indeed the liver acts as a bottleneck, limiting circulating levels of calcidiol (especially in highly productive sows).

This is followed by step two, processing in the kidneys to produce 1,25(OH)D3 the biologically active form directly available to the animal. This second step is highly regulated and dependent upon calcium levels in the blood, whereas in comparison the first step is highly inefficient and unregulated and influences the level of vitamin D3 available to the pig. Vitamin D3 availability affects body utilisation of calcium and phosphorus, both of which are essential for bone health.

Hy-D is a unique feed supplement containing calcidiol that directly provides a rapidly available and safe metabolite of vitamin D3. By providing calcidiol, this bypasses the need for the first inefficient metabolic step in the liver. Instead it’s directly absorbed by the animal and goes straight into the blood, thus becoming available far quicker, leaving a higher concentration in the plasma for immediate use in the second step of the conversion to the biologically active form.

DSM has undertaken extensive research into optimising sow nutrition to ensure longevity, successful breeding and production of healthy litters. In 2014, the company undertook a field trial on the effect of Vitamin D3 and Hy-D on rearing gilts. Data was compared to previous historical performance data. Hy-D was included in the grower and finisher feeds at 50mcg/kg feed. A blood and bone analysis was then conducted to look at the effect of including Hy-D.

Increasing calcidiol levels are associated with increasing absorption of calcium from the gut, giving beneficial increases in bone mineral density compared to the control animals. Animals with greater bone mineral density are less susceptible to locomotive disorders. This promotes better gilt conformation and improves selection rates and potentially lifetime performance. The trials shown in Figure 2 demonstrate the higher selection rates of gilts that have been achieved by using Hy-D. 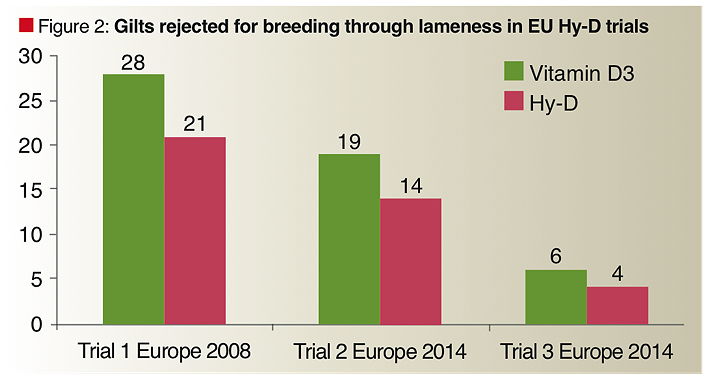 Better returns
Herd replacements are the second largest cost of pig production after feed. Culling sows before they have produced three litters has a negative impact on profitability, indeed research shows a gilt must complete three breeding cycles to pay for the cost of her replacing an older sow.

Improving skeleton strength can reduce the number of culls due to leg/bone weakness, and so increase lifetime productivity. As sows are stronger, there are also benefits in terms of litter size and piglet weight at birth and at weaning. Together, the increased production per parity combined with the increased number of parities leads to greater lifetime performance and financial returns.

Studies have shown that supplementing replacement gilts with Hy-D can increase the selection rate by 7%. If final selection occurs at 110kg, a gilt will either enter the herd for breeding or, if she hasn’t made the grade, she will go for slaughter. Assuming a gilt is worth on average £47 more for breeding gilt rather than a slaughter pig, an increase in selection rate of 7% will result in an extra £3.29/gilt. This will result in a return on investment of more than 10:1 from feeding Hy-D from weaning to final selection.