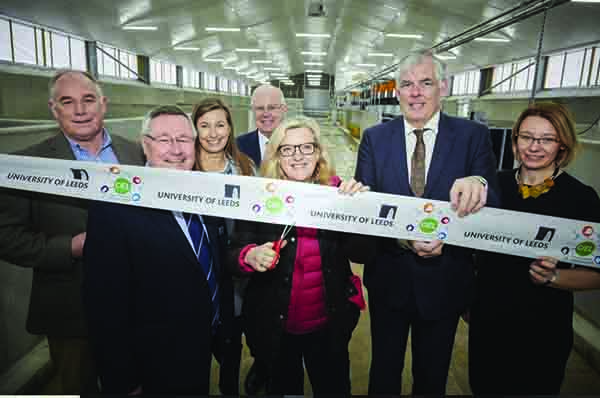 It’s one of the biggest of its kind in Europe for applied research, following investment of more than £11 million.

The capacity of the University’s farm, near Tadcaster, is increasing from 200 to 660 sows, ensuring the research carried out better represents commercial-scale pig farming. Of these, 220 will be outdoors, with the outdoor unit already up and running. The current indoor herd is set to move into the new indoor facility in February.

The National Pig Centre aims to be a leading research facility for pig nutrition, behaviour, health and production system research, themes that, the researchers point out, all impact on each other and on the broader aim of lowering emissions.

Professor Lisa Collins, academic lead for the PigSustain project and head of the university’s School of Biology, said, at the launch event: “This new centre allows us to expand our work to improve the welfare of pigs and the sustainability of the British pig industry. The combination of an outdoor sow unit with an indoor system is unique in Europe, enabling direct comparison of the different rearing systems.

“Our aim is to lower the environmental footprint of pig farming while ensuring that high welfare standards are maintained, helping the UK achieve the NFU target of reaching net zero greenhouse gas emissions across the whole of agriculture in England and Wales by 2040.”

The centre has been launched in partnership with CIEL (Centre for Innovation Excellence in Livestock) which has invested £4.5m, with funding from Innovate UK. Professor Collins also highlighted financial support from University of Leeds alumnus Nigel Bertram, and the leading-edge work of Helen Miller, professor of animal bioscience, in developing the centre.

Lyndsay Chapman, CIEL’s chief executive, said the centre was aiming to promote collaboration between researchers and companies in the UK and abroad. “This central hub at Leeds complements facilities elsewhere. You can work at one research institution, but draw in the best expertise from another.

“We want people to come to us with a question about something that can help the pig industry and ask: Does anyone else have this question? Who could we work with? Can you help us find funding?”

The University of Leeds and the National Pig Centre are part of CIEL’s nationwide alliance of 12 UK research institutions and numerous industry members, from pre- farmgate to retailers.

In researching the unit design and systems, the team travelled to various countries, including Denmark, France and the Netherlands, as well as visiting several modern commercial pig units in the UK. There are many impressive aspects to it.

The centre has clear biosecurity zones. For example, to enter the pig areas, visitors need to be 48 hours pig-free, have to shower-in and are provided with site clothing, although the visitor centre doesn’t require visitors to be pig-free or shower in.

PRECISION NUTRITION
On the indoor unit, precision technology and ear tagging will be used for in-depth, automated nutrition trials to understand how best to tailor diets and management of individual pigs at all stages of production. 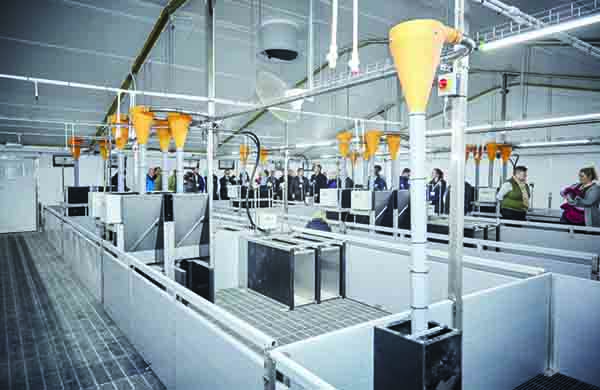 In the nursery, there are free access precision feeders and drinkers that recognise each pig by its ear tag

It has a high-volume, low-pressure air-fed system, to deliver feed quickly to individual feeders, with minimal residue left in the pipe.

The air feed system ensures there is no cross-contamination of diets so multiple dietary formulations can be fed. There are 20 feed silos on the unit to facilitate this.

Professor Collins said the CCTV equipment is fairly inexpensive, but the system uses a clever algorithm for automatic pig detection and tracking, developed jointly with the University of Lincoln through the PigSustain project.

She said: “The algorithm is reliably detecting aggression and the next steps are to train it to detect tail biting and health issues. It will help to identify animals that are ill well before clinical signs appear.”

Longer term, the plan is to combine and analyse data from lots of sources. Professor Collins said: “Farm data from farrowing through to finishing should be integrated with abattoir data so that we look at the whole system together.”

SOW AUTO-SORT
Dry sows will be housed on straw in one large group, all at different stages of pregnancy. Electronic sow feeders will provide individual nutritional requirements and an auto sorter will direct sows into a separate group after feeding when they are ready to farrow. The team decided to go for straw-based dry sow housing as it is more representative of UK systems.

TEMPORARY CRATING
In the farrowing rooms, they have installed Jyden pens with a swing-across side, which can be easily moved to confine the sow when needed and then opened up again.

“Sows will initially go into the open pen to allow nest building and will then be confined until three to four days post-farrowing,” said Dr George Sorensen, field research unit manager for the University of Leeds.

“We didn’t want to build a new farm with conventional crates, only to have legislation or consumer attitudes change and have to refit. Likewise, I don’t feel that the true loose nursing systems are ready yet for a commercial and profitable pig unit.

“We were able to see the pens in a well- run commercial pig unit in Denmark, which also had the air feed system in operation.”

For sow enrichment, straw will be provided as nesting material, along with movable hard rubber toys, which will be regularly cleaned, disinfected and rotated between pens to maintain novelty.

As with the rest of the unit, the air-fed system delivers feed to individual pens, and water will be provided on a metered basis to follow the sows’ demands as they increase later in lactation. It will feed different sows randomly and quietly at different times to help maintain a calm environment. 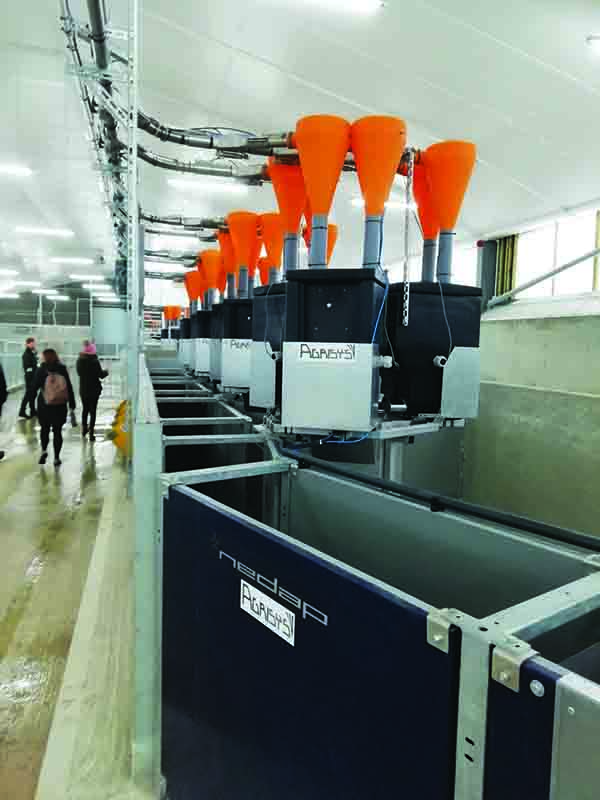 The ventilation system throughout the unit combines ceiling fans and louvre windows on thermostatic control. The unit also has high pressure cooling installed throughout, from farrow to finish, where fine mist is released to help cool the rooms further during hot weather by up to 5°C.

BATCH SYSTEM
Dr Sorensen said: “We will be building up the breeding herd to 440 sows using bought-in maiden gilts. We are on a three-week batch system and plan to scale up in increments, over the course of two batches to avoid the herd being gilt-dominated.”

AUTO-WEIGHING
In the nursery, the young pigs have free access precision feeders and drinkers that recognise each pig by its ear tag. Water intakes are monitored for individuals and, while they’re drinking, they’re also weighed, helping to alleviate additional stress in the post-weaning period.

The finisher rooms have a similar set up, with precision feeders and weigh scales for the pigs from 35-100kg. Here, the exact amount of feed eaten is measured – a step further than measuring what is delivered to the trough. The technology weighs the pig and the trough while it is eating to record precise intake.

Each room has two water lines, so the second can be used for medication where needed. It means individual pens can be treated via the water rather than the whole building and, for comparative trials, they can treat every other pen. 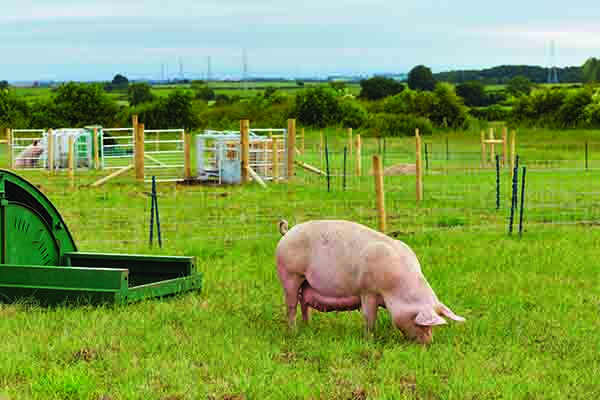 The 220-sow outdoor unit is already up and running

“We have a project underway looking at nutritional strategies for dealing with different weather,” she said. “Soil samples are also being compared with standard arable fields and results suggest a potential role for outdoor pigs in flood risk mitigation.

“Our research is not just about fixing greenhouse gas issues, it’s about further benefits, too. We can monitor movement in pens and the impact on wider crop rotation.”

They can also look at how different genetics perform in different environments and run batches of pigs with outdoor genetics through the indoor unit.

REALISTIC RESEARCH
There was a positive response from attendees at the centre’s launch. Karro’s head of agriculture development, Nick Davies, said: “I think it will offer applied research at scale, showcasing innovative new technology that is not so far from reality that people will think replicating it within their own business is a pipe dream. What needs to be clear is the return on investment and over what time period.

“We also need to think more about the way we use and visualise data live. Perhaps the data captured could be used on screen across the unit in the same way as white board displays and sow cards. I would like to see the centre used to bring herdspeople and owners together.”

There are also plans for feed additive research projects and precision finishing. Inevitably some of the research will be pre- competitive so the results will not initially be shared, but other project results will be published.

There’s also potential for the centre to share overall herd production data trends, with the masses of data being collected daily – albeit performance will sometimes be skewed by the changing research activities going on over time.

The centre’s research technicians said they were looking forward to seeing early warning of health issues via feed and water intake monitoring. They are confident the cameras and practical insight on these technologies will be of huge value.

It will be fascinating to follow how the unit’s systems are managed and the team’s experience of working with them.

Projects at the National Pig Centre will include:

More information
Everyone across the industry is encouraged to go and have a look in person, get in touch about ideas for collaboration on trial work or make use of the Nigel Bertram Visitor Centre for meetings – perhaps regional pig discussion groups. It has conference and meeting facilities, offices and live CCTV feeds from the indoor pig unit, so pigs can be observed without visitors having to enter the unit.

The National Pig Centre’s team and CIEL are very much open to ideas on how people would like to make the most of the exciting new opportunities the centre presents.