The outcome of these reviews could have significant implications for how antibiotics are used in future and for the availability of alternatives, according to Donal Murphy, head of technical and regulatory affairs for the National Office of Animal Health, which represents the animal medicines industry. 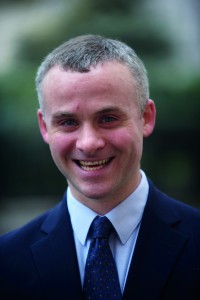 Donal Murphy, head of technical and regulatory affairs for the National Office of Animal Health

How antibiotics are used
The key proposals include measures to greatly limit any preventive use of antibiotics, requirements for greater data collection about antibiotic use and greater use of diagnostic testing to ensure responsible prescribing by veterinary surgeons and responsible use by farmers, Mr Murphy said.

Carry-over: The new medicated feed regulation will set limits on the ‘carry-over’ of traces of veterinary medicine in animal feed production lines from one batch to the next. The current Directive 90/167EC does not cover this. Mr Murphy said a certain amount of carry-over was ‘unavoidable in the context of feed production’.

The draft legislation has led to different proposals for harmonised carry-over limits across Europe, varying from 1% to 3%.
He said: “As analytical techniques constantly improve, it can be possible to find tiny traces of medicine in subsequent batches of feed after the medicated feed has been manufactured. These minuscule traces are not a concern from an animal or public health perspective.

“We are proposing carry-over limits that are as low as reasonably achievable for the feed industry, as, otherwise, it could become unviable for feed companies to manufacture medicated feed. There are calls from some quarters for limits below 1% or even for ‘zero tolerance’ – these must be resisted.

“The Commission recognises the importance of medicated feed for animal health and welfare and has been clear there are no plans to ban it. They are trying to harmonise the standards across Europe.
“It has acknowledged that a zero tolerance approach could be detrimental if it forced the industry to use less controlled methods of administering medicines, such as top dressing. I understand that is what happened in Germany when they took a zero tolerance approach.”

Preventive use: The use of antimicrobials preventively via medicated feed and other administration routes, such as injection or in water, is likely to be greatly limited under the reviews of both the medicated feed and veterinary medicines regulations.

Mr Murphy said: “As the Commission looks to address AMR, it will target preventive use. It may be the case that prophylactic use of antimicrobials via medicated feed is banned unless the veterinary medicine has been specifically authorised by the independent regulatory authorities for that form of usage.”

Coccidiostats, which are anti-protozoal feed additives, are not within the scope of this legislation as they are regulated and authorised by the European Food Safety Authority (EFSA).
Examination/assessment by vets at prescribing: It is expected that both regulations will require stricter controls prior to prescriptions for antimicrobials being issued.

“The details of these requirements remain unclear, but a more in-depth assessment by the prescribing veterinary surgeon of the need for treatment with an antimicrobial is likely to be included in the new laws,” Mr Murphy added.
Homogeneity: The new legislation will also address how to ensure medicated feed is as homogenous as possible. Mr Murphy said: “It is important that there is an even mix of medicine throughout the feed to ensure the animal gets the right treatment at the appropriate dose rate.”

What difference will Brexit make?
By the time these new regulations come into effect, the UK is likely to be well out of the EU.
Mr Murphy expects the new rules governing how antibiotics are used to still apply in the UK, however. After all, the planned Great Repeal Bill will, from the moment we leave, transfer all existing EU legislation into UK law.

He said: “The exact nature of the UK’s arrangements with the EU remains unclear, but our best guess is that this regulation is going to remain relevant in some way.
“The proposals aim to address AMR and this remains a priority for UK Government, regardless of Brexit, so one would expect the UK to adopt a very similar approach to the use of antibiotics in animals.”
However, he said Brexit could present a challenge in ensuring the UK is not disadvantaged when it comes to accessing new products that become available at EU level.

Currently, companies developing new products for the entire EU market apply to the European Medicines Agency (EMA), (which is currently London-based, although for how much longer is anyone’s guess). Different member states have an input into the EMA’s assessments and products are authorised for use in all member states.
“Following Brexit, we will need to ensure products authorised through that route will also be readily accessible in the UK,” Mr Murphy said.

How this might work is unclear but prior to the Brexit vote, Farming Minister George Eustice spoke of his desire for a dual regulatory process for plant and veterinary products. The UK would remain on the EU committees that assess the efficacy, safety and environmental impact of new products, but then take its own decision on licensing them.
Mr Murphy added: “It is important that the arrangements between the EU and UK following Brexit are done in such a way that allows the UK to continue to get access to those products as quickly as other EU countries.

“The Veterinary Medicines Directorate here in the UK is one of the leading regulatory agencies in Europe, so I am confident that some sort of system will be established so we can continue to access products available at an EU level.
“We will need to see how the detail will work. But we want to avoid a system that leads to the UK becoming a second phase launch area, which would put the entire industry at a disadvantage.” 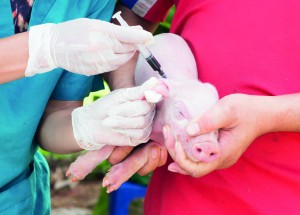 “Our members are constantly looking at developing alternatives to antibiotics. The obvious ones are the various vaccines that have been brought to the market over the years, although it must be acknowledged that it isn’t always technically feasible to develop a vaccine for every infectious agent. But where they can, they are doing it. As technologies change, one would hope, in the future, there will be potential for more vaccines and other veterinary medicines to safeguard animal health and welfare.”

“Currently, companies generate a dossier of data about their product for the regulator to assess and decide if a marketing authorisation should be issued, and it can be a very costly and time-consuming process,” Mr Murphy said, pointing out that the veterinary medicines market amounts to just 2.5% of the human medicine market in value.

“It’s a small industry and the Commission’s new regulation is trying to improve the process so we get more product innovation and product availability in the future,” he said.