In order to ensure rapid progress towards this goal, all signatories have agreed to:

You can learn more about the UK Soy Manifesto, HERE 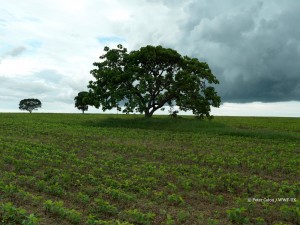 As the global COP26 conference in Glasgow looks to address the long-term climate change threat, the companies acknowledge that the conversion of forests and other ecosystems for agricultural production – including the production of soy, palm, beef, and timber – is a major contributor to climate change, as well as driving biodiversity loss.

Just under a quarter (23%) of global human-caused greenhouse gas emissions come from agriculture, forestry, and other land uses, and most of these emissions are due to deforestation.

“It does not have to be this way: agricultural and forestry commodities can be grown without further destroying native vegetation,” the industry leaders said.

“The UK’s consumption of soy – 3.5 million tonnes in 2020 – though small in global terms, is contributing to pressure on biodiverse landscapes such as the Cerrado, the Atlantic Forest, the Gran Chaco and Chiquitania in South America.

“UK consumption of soy in 2017 led to an estimated 3,081 hectares of deforestation, an area twice the size of the City of London. Soy is one of the main contributors to the UK’s deforestation and conversion footprint today. Most of this soy is used in the form of animal feed.”

UK industry has already started to take action to protect forests and other natural ecosystems by improving transparency and information sharing throughout UK soy supply chains and driving increased use of certification to support sustainable soy production in South America. But there is a shared recognition of the need to take more ambitious action, faster and at scale.

“Mainstream transformation cannot be achieved by companies working on their individual supply chains alone. Businesses across supply chains, as well as soy producers, must take responsibility and act together,” the industry leaders said.

“Global markets need to provide financial incentives and technical support to boost sustainable production. Governments in producer and consumer countries and regions also have an important role to play.” 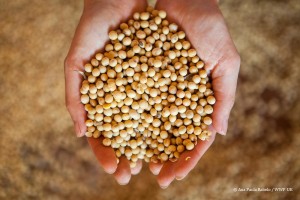 Mr Murphy said: “The conversion of forests and other ecosystems for agricultural production – including the production of soy – is a major contributor to climate change, as well as driving biodiversity loss. Soy is the single most impactful forest-risk commodity in Tesco’s supply chain, which is why we’ve already made a commitment that by 2025 we will only source soy from whole areas verified as deforestation-free. But we can’t solve this issue on our own.

Ms Steel added: “The UK Soy Manifesto presents the chance for a real change and all soy users should commit to it. We won’t forget those who failed to step up to protect our planet.”

James McCulloch, Head of Feed, Agricultural Industries Confederation (AIC) said: “The animal feed supply chain will continue to play its part in helping to deliver the Manifesto aims. We remain convinced that collaboration between the market, Government and other stakeholders can ensure the protection of forests which are such a vital global resource.”

The NPA is supportive of the manifesto in principle. NPA policy services officer Lizzie Wilson said: “The UK pig sector is absolutely committed to more responsible soya use. COP26 has highlighted the importance of concerted action to address climate change and it is important for the industry to take credible action, and be seen to be doing so.

“It is absolutely incumbent on all parts of the supply chain to deliver on this as each part has a responsibility. The burden must be shared evenly.”

A UK Government spokesperson said: “The UK Government welcomes the leadership role UK companies are taking to drive the transition to deforestation-free soy supply chains through the UK Soy Manifesto. Initiatives like the manifesto can complement Government efforts to meeting our climate and environment objectives.”