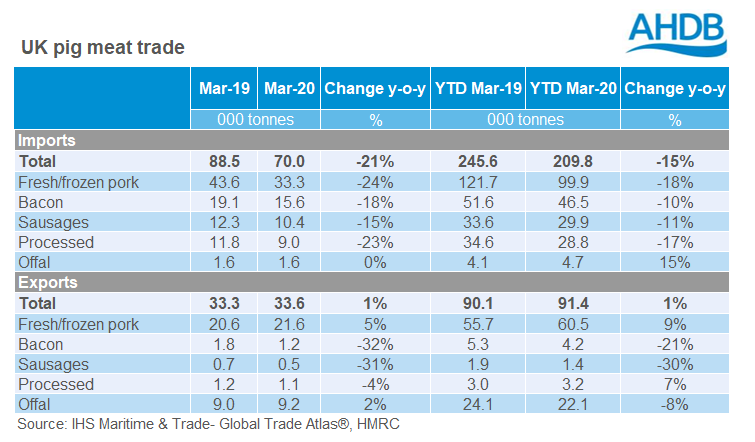 The UK exported 21,600 tonnes of fresh/frozen pork in March, 5% more than in March 2019. The monthly volume shipped was the third highest on record, beaten only by October and November last year. Offal shipments return to growth in March, recording a marginal increase (2%) on the year, supported by an uplift in shipments to China.

Overall pig meat export growth was constrained to 1% by declining volumes to other destinations. Volumes to Hong Kong were particularly affected falling by 70% (-1,600 tonnes) year-on-year. Most shipments to key EU countries also declined, including the Netherlands (-36% or 1,300 tonnes) and Ireland (-22% or 1,200 tonnes). The 25% tariff on pork exports to the US also seems to be having an impact, with this trade falling by over 80% (-900 tonnes).

Ms Rusk commented: “There have been numerous reports of logistical challenges supplying China this year due to the coronavirus pandemic. Several reports have highlighted ongoing challenges with container availability, particularly refrigerated ones. However, it seems UK exports in March were still strong. Whether we could have sent more if circumstances had been more favourable is unclear- the UK is a net importer of pork, there will be limitations on how much we can reasonably expect to send.”

In March, shipments from all major sources fell and UK imports of pig meat continued to track below last year’s levels. A total of 33,300 tonnes of fresh and frozen pork was imported during the month, 24% less than in the same month in 2019. Imports of other pig meat products, such as bacon sausages and processed, also recorded a decline in March. Meanwhile, imports of offal remained steady on the year.

Ms Rusk commented: “UK imports of pork have been falling away since last April; demand has been relatively weak, and EU pork has been relatively expensive. While ‘panic-buying’ was exhibited in March, it was most pronounced in final week following the introduction of the lockdown measures. As such, we are likely to see any effects of this in the April trade data. The closure of most foodservice venues during the lockdown may well depress import demand overall though. Data for this is not available, but anecdotally it is thought that imported product is disproportionately used in foodservice.”

EU fresh/frozen pork exports were up by 7% in March, with shipments to non-EU markets amounting to 268,500 tonnes. It is worth noting that EU trade data no longer includes the UK as a member state. China drove the overall growth once again, taking nearly twice as much EU product as a year earlier.

Pig offal exports remained in growth, as 2% more was supplies to non-EU countries than in March 2019. The volume shipped to China increased by 22%, taking its market share from 58% to 69%. On the other hand, Hong Kong (-34%), the Philippines (-33%), the UK (-90%) and South Korea (-69%) all imported less pig offal from the EU. The first quarter figure overall showed a larger rise for pig offal exports, with 5% more traded compared with the same period in 2019. 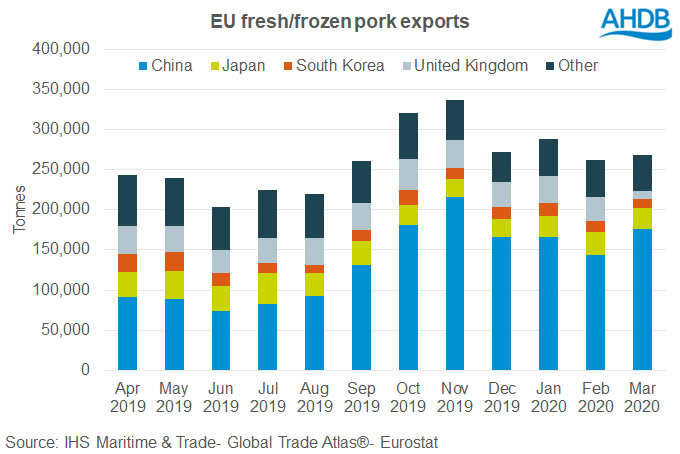 AHDB analyst Bethan Wilkins reported that a sharp drop in shipments to the UK limited the increase. She said: “Eurostat figures suggest a 75% drop in trade with the UK, compared with the month last year. UK HMRC figures recorded a 24% decline annual decline in fresh/frozen pork imports during the month. Though still large, this suggests the drop in the EU figures is rather overstated. However, to some extent, it could also be that shipments from the EU at the end of March, which would not arrive in the UK until April, particularly declined.

“Lockdown measures introduced here, and in Europe, cut foodservice demand and disrupted supply chains. UK pork production was also up over 10% on the year during March, which may have eased demand for imported product somewhat.”