Ms Wilkins explained: “These increases have been achieved despite logistical difficulties and increasing competition from other global exporters. China has been keen to import more pork to help stabilise local prices, with supplies still very short due to African Swine Fever curtailing domestic production.”

The average price of pig meat and offal exports to China remained elevated during the month at €2.18/kg, but did fall compared to earlier in the year.

Increased volumes to the main market, China (+15% year-on-year), supported overall volumes. However, shipments to the Philippines were subdued, at only a quarter of last year’s level. This meant market share fell from 7% last year to just 2% this year. Trade with South Korea also fell, following the trend for fresh/frozen pork.

Shipments to Japan and South Korea were lower again in May, influenced by a mix of competition on the global markets and lower demand.

Chinese prices for liveweight pigs have been moving up since mid-May, according to AHDB analyst Felcity Rusk. 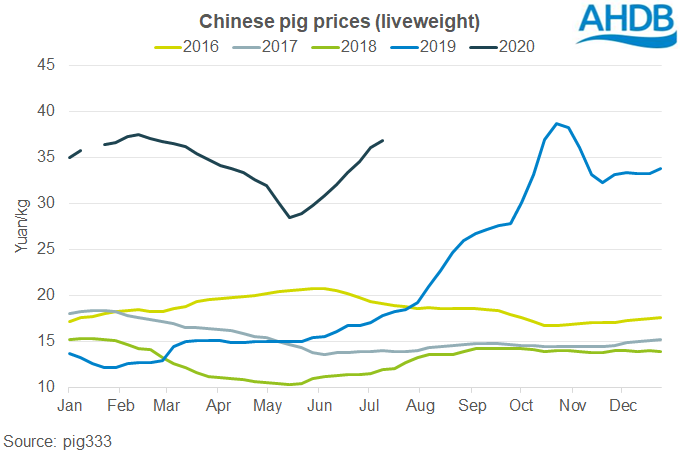 Ms Rusk explained: “This reduction in supplies is due to a combination of outbreaks of African Swine Fever (ASF) as well as flooding delaying slaughter in some regions.

“Prices have also risen to reflect the additional biosecurity measures that China Customs have introduced following new cases of COVID-19. China customs now require a declaration from exporters that product is not contaminated with the coronavirus.

“Following these outbreaks, China suspended shipments from a number of plants where staff were confirmed to have coronavirus, including some in Europe. Additionally, some exporters have voluntarily paused exports to the nation. It is unclear exactly how this situation will develop or resolve at present.”