Speaking to Pig World, Dr Susanna Williamson, pig veterinary lead at APHA’s disease surveillance unit, said an ASF outbreak would be ‘hugely damaging’ to the UK pig industry and is urging producers to take all necessary precautions, particularly when it comes to feeding pigs. “ASF is the main notifiable pig disease that we are concerned about,” she said. 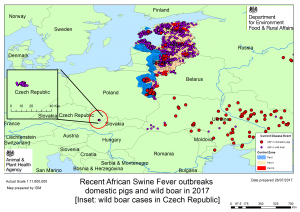 “ASF is in Eastern Europe and there is a focus of infection there in wild boar, which is spilling over into domestic pigs,’ she said.

“In the past few weeks is there have been wild boar found dead due to African Swine Fever in the Czech Republic and that means it has moved further west. This is a significant geographic jump into a new region.

“The source of infection has not yet been confirmed, but generally when the disease appears for the first time at this distance from previously affected areas, it may be more likely to be due to illegal movements or feeding on contaminated products.

“The first wild boar cases in the Czech Republic were mostly found near inhabited areas and introduction of infection by wild boar consuming contaminated products is the most likely scenario. So it is on our radar.”

Defra and APHA continue to describe the risk to the UK is classified as ‘very low risk’, that is, “rare but could occur’, pointing to EU rules in place to prevent its spread. But Dr Williamson pointed out this is not the same as ‘negligible’ and that 2000 Classical Swine Fever and 2001 foot-and-mouth disease outbreaks reinforce this.

“We continue to emphasise the role all pig farmers play in making sure their farms are as biosecure as possible,” she said.

“The most important thing is ensuring no meat or meat products are ever fed to domestic pigs, which is illegal anyway. It is unlikely anyone would do this deliberately on a commercial farm but smallholder or pet pig owners may consider that it is acceptable to feed their kitchen waste to their pigs and need to know that they are breaking the law and endangering the health of their pigs.”