My first observed farrowing took place in a straw-covered solid floored pen with state-of-the-art anti-crush bars round the walls. The large white sow had seven born and four survived to be weaned at eight weeks. It was 1960.

Last November, I visited a farrowing house with 30 sows in a batch. Each batch was in a fully-slatted, environmentally-controlled room, each sow confined in a farrowing crate for 27 days from birth to weaning. The batch averaged just under 14 piglets per sow weaned, each weighing on average almost the same as their 1960 counterparts. 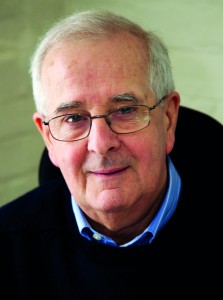 You may feel that is not a fair comparison and I admit it is rather selective, but remember that a top class indoor unit then would produce 12-15 pigs per sow per year, and today, more than twice as many. Although the sow remained unconfined, systems such as the Solari pen, a mono-pitched box with a rear creep area, proved popular for a while.

The late-60’s saw further developments, including early farrowing houses. Two longitudinal nests flanked a central narrow box which restrained the sow, all in plywood and arranged in rows with access passages front and rear for feeding and cleaning.

Steel bars soon replaced the plywood, giving greater visibility, and the crate in a pen, the crate for the sow and the pen for the piglets, soon followed.

That principle, many times refined, still holds today. Some of the refinements represented major steps forward. Slats behind the sow, the cold side slat to catch the piglets’ dunging habit and then, finally, fully-slatted systems with integrated heat mats.

Farrowing crates also evolved – the Ritchie crate and its successor the NPD floating rail crate, still the most popular today, and its complex competitor the Proctor hydraulic crate, all claimed good teat presentation. The finger bar crate, with its vertical fingers has been an alternative throughout.

Ever-changing improvements in the genetic capability of the sow to produce more piglets with improving viability meant it was increasingly important to improve the total nutritional intake of the sow.

Automatic feed dispensing with wet or dry feed could and often did over-face the sow, thus suppressing appetite, with sour or stale food the result. The individual trough mounted sensor for wet feeding and, for dry feed, the simple sow-operated wheel dispenser or the more expensive, but highly effective, Gestal system, addressed these problems.

These solutions, along with easy-to-wash and clean buildings with effective environments could now keep pace with the sows’ and the industry’s increasing demands.

The story to that point is linear and straightforward. Except that it wasn’t like that at all. The line meandered somewhat, with farrowing equipment and layout reflecting, from time to time, attempts to address that tension between the pigs’ ‘ideal’ requirements and commercial imperative. 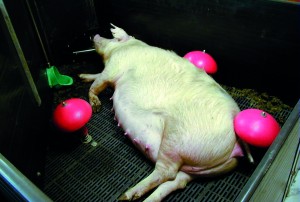 Hardly a Pig Fair passed without new solutions, ranging from the clever to the bizarre, being showcased. I recall the years the concrete farrowing nest from the now defunct Beacon Trailers won the New Equipment Award and Ikadan’s spring loaded giant plastic mushrooms, controlling the sows lying position didn’t.

Some equipment relied on outstanding stock people for acceptable results. The farrowing nest, which harked back to the early farrowing boxes but without the sows being restrained, required almost constant monitoring and attendance.

Outdoor units seemed to show less ingenuity, relying mainly on the farrowing ark, sometimes with anti-crush rails and occasionally with a creep area. The main emphasis was on improving insulation and longevity.

One exception was the demountable, four-place outdoor farrowing boxes, complete with crates, creeps and surrounds on an early commercial outdoor unit on the Breckland.

In addition, I know of one attempt, at least, to marry outdoor farrowing arks with an essentially indoor unit, when Paul Wright developed a farrowing ‘village’ at Bishop Burton College pig unit. Both generated considerable interest but had limited commercial success. 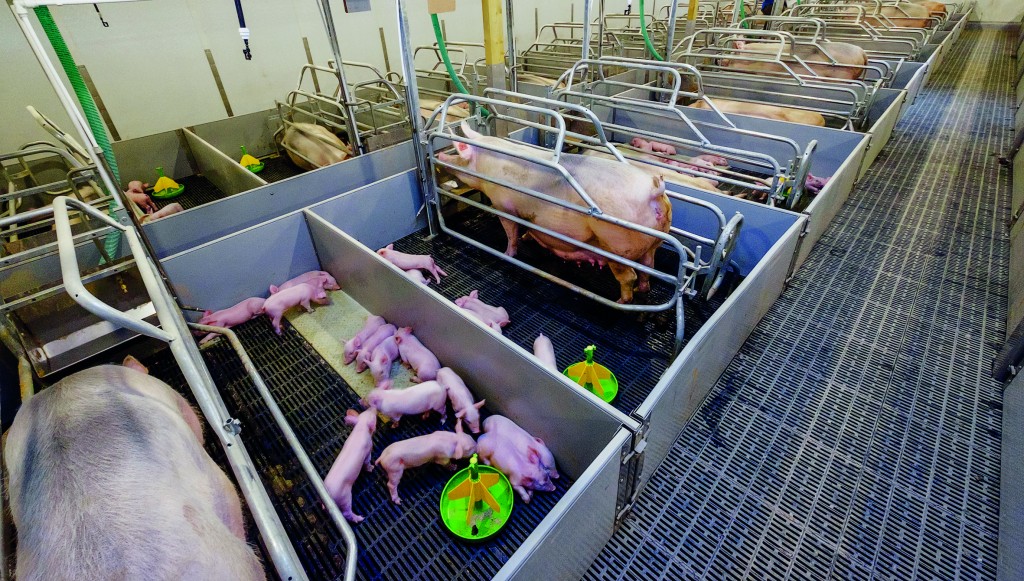 Differences have developed between crate configuration in the UK and the rest of Europe. The crate with various degrees of slant and one or both sides openable is common everywhere in mainland Europe, but not here. Although the side opening crate option is readily available in the UK, it is still currently less popular. This may change with possible alterations to legislation.

So what does the future hold?

I feel the number one problem is uncertainty. I detect from colleagues and farmers that an uncertain future is both deeply worrying and commercially unacceptable.

The pig industry supplies quality food through good times and bad, often in the face of unfair and uninformed criticism. History also informs us that what happens in other countries is not necessarily a good indicator of what happens here. We have the added uncertainty of our largest customers applying different imperatives to ours.

Farrowing systems are undeniably under the spotlight and time is not on our side. We need to keep searching for a solution to serve the best interests of both sow and piglets.

We need solutions which are adoptable, practical and will not kill off another proportion of our production capability. In the UK we already have a wider choice of production methods than most.

We do not lack for well-researched systems and equipment. Pig-Safe developed and trialled by teams led at Scottish Colleges by Emma Baxter and Newcastle University by Sandra Edwards have attracted world-wide interest and some commercial uptake.

The 360 system, the work of Martin Barker and his team at Midland Pig Producers, has taken the idea of confining the sow for a short period whilst farrowing and a few days following but put it on the footprint of a conventional crate area. The crate is opened after the initial high overlying risk is over.

Both claim free farrowing credentials whilst having very different space requirements. Seven square metres plus of the former contrasts markedly with the four and a half of the 360.

If we took the 6.5m requirement announced for new builds in Germany, where would the 360 sit? Other companies, including Warkup, have developed their own solutions.

I would maintain that none of these systems are right or wrong, but are viable options, worthy of consideration.

In practical terms, most in our industry recognises the need for adequate space but, to return to a currently popular phrase – it must be based on the science. Any changes must also have a sufficiently generous adoption period to maintain business viability.

The NPA has already eloquently addressed and presented the issues surrounding the farrowing crate. In their briefing document to Lord Goldsmith, they have cited instances of farmers making building decisions based on supply contracts which were subsequently withdrawn.

This is not new and has happened before causing frustration and justifiable anger for relatively few. Ominously, this and the previous instance both concerned farrowing ‘rules’.

The problem this time is that decisions will be made affecting the whole industry. Future-proofing farrowing accommodation will, without clear guidance, lead to confusion and mistakes.

Farmers are looking for clear guidance to inform current and future decisions. As guardians of the wellbeing of their animals they are endlessly resilient at squaring genuine welfare with commercial imperatives.

They are aware that nothing ever stands still and that change is inevitable. On this most important issue, sense has to prevail with a workable mix of flexibility and aspiration, representing the best outcomes for both sow and piglet- and a roadmap is urgently needed and soon.

Birth is never completely stress free for mother and young. In this age, when we so often attempt to imprint human feelings and values on animal behaviour, we must remember what the real issues are and what freedom really means.