This was subsequently confirmed by photos showing the carbon footprint of an Ayrshire bacon Scottish morning roll to be 0.4kg CO2, while a plant-based croissant with 100% Scottish ingredients was 0.5kg CO2.

This was welcomed by the farming industry on social media. 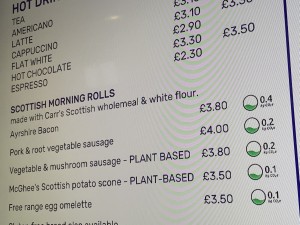 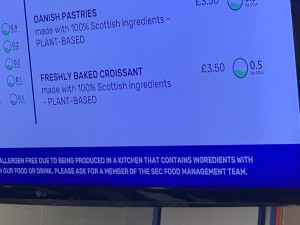 The account Pasturetec added: “The BBC reporting on #cop26 said that the food choices at the conference have carbon values on them and apparently a croissant has a higher carbon output than a bacon roll #smallwins #ukagriculture #cop26 @pigworldmag @AHDB_Pork”

Lee Thompson added: “This is what the British pork industry needs! Good work getting it online @piggy_jags.”

While this is only one small comparison, the pig sector is trying hard to improve its carbon footprint. Ahead of COP26, two major UK pork processors set out their sustainability credentials, particularly regarding the sourcing of soya.

Pilgrim’s UK has committed to using fully verified, zero-deforestation sustainable soya to feed its pigs by 2025. It claims to already have the lowest soya usage in pig diets in Europe, which it said has been validated for the last two consecutive years.

Meanwhile, Cranswick has announced that it has received carbon neutral certification for all 14 of its eligible UK manufacturing sites, having already reduced its relative carbon emissions by 18% in the last financial year.

Cranswick CEO Adam Couch said: “We recognised in 2018 that tackling climate change is everyone’s responsibility and, as a leading operator in the food industry it was incumbent upon us to play our part.”