“We are working with processors to increase processing throughput and the recruitment of domestic workers. We continue to engage in discussion with retailers and the foodservice sector and are working with AHDB to reactivate the Chinese market and to identify other export markets,” he told peers. 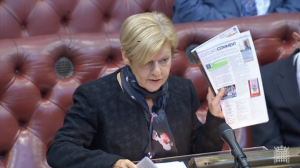 Then after a highly critical Pig World editorial suggesting that the Government did not care about the pig sector’s plight was read out by Labour peer Baroness Jones, who demanded to know when the Government would act on visas, he responded:

“I can tell the noble Baroness we care deeply about this sector and people that work in it and the welfare of animal concerned and want nothing more than to smooth out the perfect storm of a variety of different issues, which have brought this to a head at this particular time.

“I had hoped to be able to come to the house within an announcement. It is imminent. She will be pleased with the hard work Ministers and officials have put in to show that we did care and we want this industry to get back on its feet.”