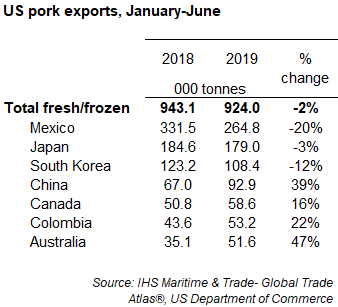 Mexico remained the primary market for US pork exports, but there was a 20% decline in shipments across the first half of the year overall. The decline did slow in June, following the removal of restrictive tariffs on US imports, but volumes remain well below historic levels. Reports suggest demand is poor, influenced by rising global pork prices, which reduce import competitiveness.

Supplies to Japan also recorded a 5% decline on a year earlier as the industry lost market share to the EU and Canada.

AHDB’s senior analyst, Bethan Wilkins, said: “Looking forward, continued breeding herd expansion means production growth is set to continue. Rising demand will, therefore, be needed if prices are to be supported. This will be linked to success on the export market, which at the moment looks uncertain.

“US pork exports are currently unable to realise the full potential of the Chinese market due to the ongoing trade war. Optimism over whether the tariffs could be at least partially lifted has been up and down in recent weeks, and lean hog futures have reacted accordingly. Most recently, optimism has been low, with concerns that China could suspend purchases of US pork entirely.

“Whether these tariffs can be lifted will not only affect the US outlook this year but also that for EU suppliers to China, who are currently enjoying increased competitiveness.”