According to the USDA, 63.66 million pigs have been slaughtered in the first six months of the year, compared with 62.80 million during the same period in 2019. This includes over 180,000 more sows, which could inhibit further growth in the coming years. Although, reports indicate that at least some of these “sows” may be oversized finished pigs.

AHDB lead analyst Duncan Wyatt, said: “The US pork industry has been growing strongly in recent years, in terms of both supply and slaughter capacity. But, although more pigs have been slaughtered so far this year, even more have been available to kill. Meyer said in an interview this week that the US pork industry has slaughtered about 1.1 million more pigs from 1 June to mid-July than it would have without Covid-19. The industry has rebounded sharply, but is still recovering from the interruptions.”

US exports of fresh and frozen pork have been strong over the first six months of 2020, increasing by 35% year on year to 1.24 million tonnes. Exports to China have increased more than threefold to nearly 450 thousand tonnes, and account for the export growth. Even more so in recent months, as exports to Japan and Mexico have fallen. 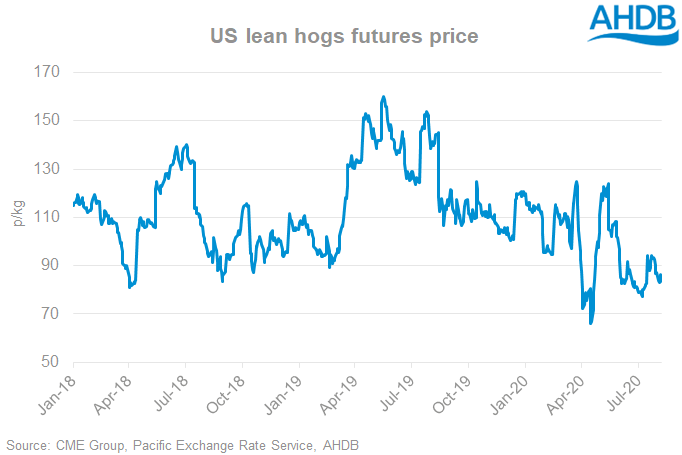 Wyatt added: “”hile slaughter capacity in US processing plants has recovered significantly since the spring when as much as 40% was offline, it is thought that the industry “is still hovering around 5% idle capacity,” and that “that loss is more or less permanent.” Meyer expects the backlog of pigs to expand to as much as 1.6 million by the end of August and to 2.5 million by the end of the year. None of this is positive for pig prices, which have been under pressure for some months.”