Following from the higher farrowing rate, the Q2 2018 pig crop is pegged at 33.2 million head (+4% year-on-year). Within this, the number of pigs weaned per litter increased by nearly 0.1 compared to the same period last year, to a record high for March-May at 10.63. This growth, coupled with higher ongoing farrowing intentions, means finished pig supplies can be expected to remain plentiful for the rest of this year at least. 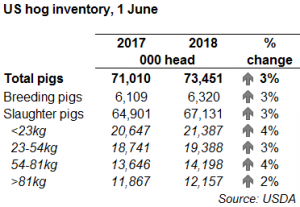 The growing US pig population comes at a time of uncertainty, reflecting the increased level of risk surrounding available export markets. China is the 4th largest export destination for US pork, and it is the largest destination for pig offal exports. At the start of April, China introduced an additional 25% tariff on pig meat products from the US, and recently announced a second 25% tariff will be applied on top of this from 6 July.

Exports of pig meat and offal to China in April declined only 6% on the year, at 25,700 tonnes. However, it will be interesting to see how this trade flow develops as the latest export figures are released, and the higher tariff rate is implemented, going forwards.

In a similar turn of events, from July 5 onwards, there is a 20% tariff on US pork imported into Mexico. Mexico is the largest export destination for US pork, with around 36% of the market by volume. However, the tariff will reduce the price competitiveness of US products. With uncertainty around market access conditions escalating, price cuts may therefore be required in order to maintain and stimulate demand for US pork. This is particularly pressing as the pig population expands.