Reports suggest supplies have somewhat tightened over the past few weeks which has helped support prices. This has likely been influenced by the recent warm weather, which tends to slow growth rates. In addition, the start of the tourist season in Italy and Spain may provide some boost to demand there.

However, in general, demand in Europe is reported to be below expectations, which may partly explain the fairly subdued seasonal rise in EU pig prices this year. An increase in demand for barbeque food in particular would typically support prices at this time of year. 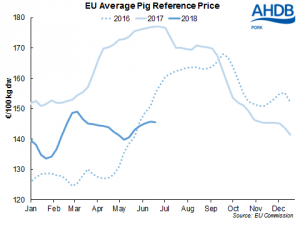 The outlook for the coming weeks remains cautious, with demand in Northern Europe potentially negatively affected by the upcoming peak holiday season. Export markets are also reported to remain challenging.

Despite the recent price increases, over the past couple of weeks the difference between this year’s reference price and last year’s has remained reasonably steady, at around €31 lower. The summer peak therefore looks set to be significantly lower than in the past two years.