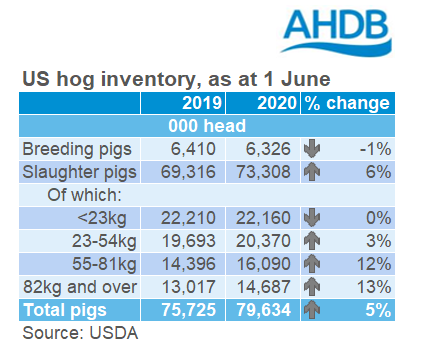 Processing capacity was severally disrupted in the spring due to the pandemic. Before the latest pig inventory was released, Rabobank estimated that the plant closures would have generated a backlog of about 3 million market-ready pigs.

However, Ms Rusk said that these figures suggest the actual backlog is smaller than this, because some extra pigs would be available this year anyway due to expansion.

She explained that the uplift in the heavier weight groups suggests that there will a large supply of pigs to come onto the market for the rest of the year, and that this will likely continue to put pressure on processing capacity as they work through the backlog.

There are also growing concerns over weaker demand later in the year. Subdued demand in combination with the expected large supplies would put downwards pressure on US pig prices.

She said: “The US pig herd has been in an expansion phase for several years. However, the difficult market outlook now seems to have driven some herd liquidation.

Farrowing intentions for the coming months are also 5% below year earlier levels. Between March and May, around half of the breeding pigs in the US farrowed.

Sow productivity remained relatively flat on the year, only recording a marginal 0.01 improvement in pigs weaned per litter, to average 11.01.

The pig crop between March and May totalled 34.93 million, 1% more than in the previous year.