In late 2017 and early 2018 carcase weights were well above year earlier levels. However, in recent months weights have dropped below last year’s levels and the seasonal rise has also been delayed, reflecting the impact of more difficult growing conditions during the hot summer. Carcase weights are now expected to remain at or below year earlier levels until next summer, with high feed costs suppressing a generally rising trend.

Production growth will therefore be broadly in line with slaughterings for 2019 as a whole, increasing 2-3% to reach around 957,000 tonnes. As for slaughter, this level of growth is also slightly slower than the increase expected for this year. 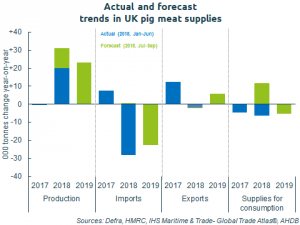 While there is some uncertainty, it seems probable that imports will continue to decline as UK production expands. However, in the short term there may be some stockpiling prior to Brexit. Meanwhile, low Chinese pork prices have limited UK exports this year, so a small decline in shipments is anticipated for 2018 overall. Performance next year will depend, in part, on Chinese demand developments. Assuming some increase as a result of the presence of African Swine Fever in the Chinese pig herd, growth should be possible, provided the UK also maintains access to the EU.

Balancing all these factors out, supplies available for consumption on the domestic market are forecast to be broadly stable again in 2019. Nonetheless, global pork production is expected to be higher next year, meaning prices could remain under pressure unless demand responds.