“Industry reports and our weekly estimated GB slaughtering suggested tighter supplies on a week-by-week basis throughout the month. As such, the rise in production seen in June this year is likely a reflection of the two extra weekdays,” Rusk explained.

Finished pig carcase weights were seasonally lighter, averaging at 85.6kg in June. This was 1.5kg heavier than in the same month in the previous year, which continues the trend in heavier carcase weights that we have seen this year.

A total of 19,000 adult pigs were slaughtered in June, 5% (900 head) more than in the previous year. Ms Rusk commented: “Cull sow markets have been particularly challenging recently due to the shutdown of a major German processing plant, reducing end-market options. We believe that sow slaughter ought to pick up this year, due to a slighter older breeding herd. However, the ability to do this may be limited in the short-term at least.”

She added: “Overall UK pig meat production reached 74,100 tonnes in June, 5% (3,400 tonnes) more than in the previous year. This is through a combination of higher throughputs, influenced by the extra weekdays, and heavier average carcase weights. This means that production in the first half of the year totalled 475,000 tonnes, 3% (11,700 tonnes) more than the same period last year.”

In contrast, the EU pig meat production fell in the month of April, with The latest figures from Eurostat indicating a 6% year-on-year decrease in EU pig throughput during April, to 19.2 million head, as reported by AHDB analyst Bethan Wilkins. She explained that this probably reflects disruption in slaughter in some countries due to COVID-19. Pig meat output during the month was also down by 5%. 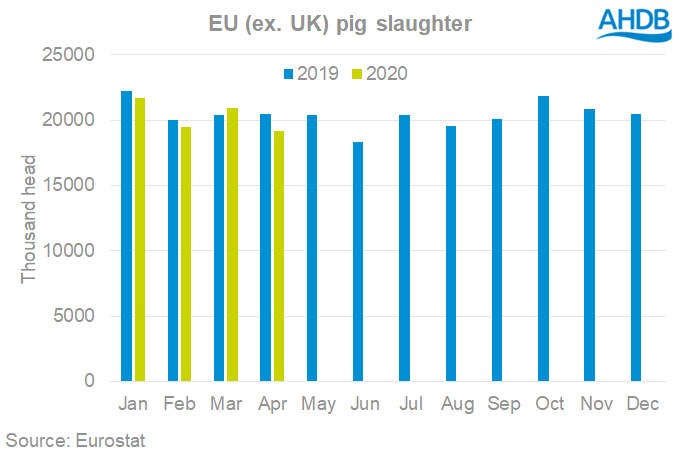 Although pig slaughter was 2% lower than in the same month last year, carcase weights averaged slightly higher, meaning the amount of pig meat produced was only 1% lower than a year earlier, at 7.70 million tonnes.

Ms Wilkins commented: “The decline in slaughter during April was apparent in many of the EU’s major producing member states. Italian throughput was down 20%, as coronavirus disrupted the supply chain, and the Polish kill was down 16%. Slaughter in Germany and Spain was down 5% and 3% respectively.

“In contrast, the pig kill remained robust in Denmark, which still slaughtered 5% more than a year earlier. The only other major producing country that managed this (excluding the UK) was Ireland, where throughput was 3% higher.

“Provisional figures for May from a few Member States suggest the declining trend has continued, and may even have worsened. A 14% annual drop in French slaughter during the month has already been reported.”