Meanwhile, shipments of bacon from the UK’s four primary bacon suppliers (around 95% of the market) are estimated at around 48,000 tonnes during Q2, 8% higher than volumes last year. This particularly reflects a recovery in exports from Denmark, which had dropped off in 2017.

AHDB has been using partner country export data to estimate UK fresh/frozen pork import levels since mid-2016, due to concerns over the HMRC figures. However, the UK import figures have been aligning more closely with the trends recorded by our suppliers this year, indicating the reliability of the import data has started to improve.

In Q2, the HMRC import figures suggest the UK imported 131,000 tonnes of fresh/frozen pork, 2% less than last year, which is close to the estimate based on supplier exports. 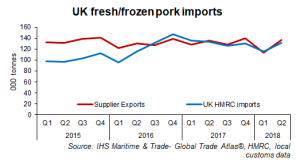 The UK import figures for bacon started to show unusual trends from mid-2017, but again the trends in these figures at least seem to be aligning more closely with estimates based on supplier exports, at least in the most recent quarter. UK import figures suggest bacon imports were 9% higher than year earlier levels in Q2, a similar percentage increase to that based on bacon exports to the UK. Although, the absolute volume remains much higher than the estimate based on supplier exports. 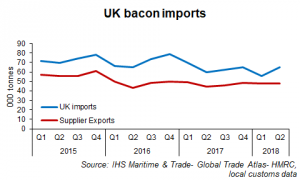 During the period, UK production was also 5% higher than year earlier levels at around 226,000 tonnes, while total pig meat exports dropped back 9% to 62,000 tonnes. HMRC reported imports of processed pig meat were lower year-on-year in Q2, but nonetheless overall, more pig meat would have been available on the domestic market compared to the same period last year.

However, this follows a phase of low import levels in the first quarter and export growth. This may have been unsustainable, leading to drawdown of stocks, despite higher UK production at the time. Across the first half of the year overall, estimates suggest supply availability would have been broadly similar to the first half of 2017.