Fresh and frozen pork volumes recorded a 2% decline in May, likely attributed to challenges in sourcing shipping containers, particularly refrigerated ones.

Despite the overall slowdown in global trade, exports to China continued to rise, although at a lower level than has been seen in recent months. In May, UK exports of pig meat (including offal) to the China increased by 42% on the year, with export values down on the month, although back in line with March levels. 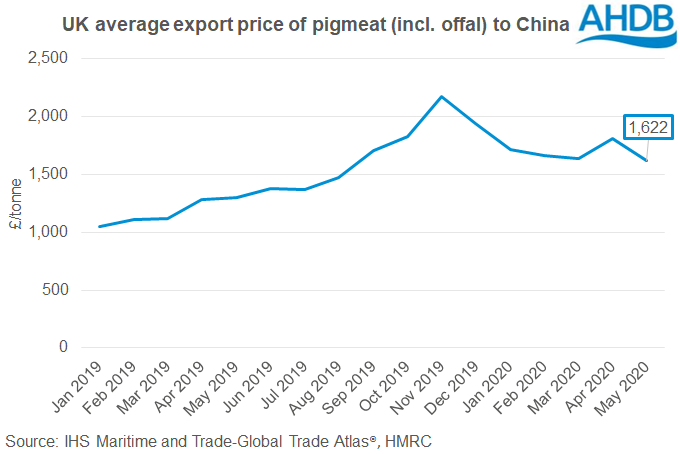 Within European markets, pork exports to Ireland recorded a signiicant 50% drop compared to the previous year, whist exports to Germany and the Netherlands recorded also a drop in volumes of 5% and 19% respectively.

In addition, exports of sausages and bacon were both under half of the volumes shipped in the same month in the previous year. In contrast, exports of offal continued to show strong growth, with 12% year-on-year growth.

Overall exports in May totalled £51.1 million, 2% more than in the previous year.

“In May, UK imports of fresh and frozen pork continued to track below the previous year, although the rate of decline was not as large as we have seen in recent months,” Ms Rusk commented.

Volumes from Germany bucked the trend, however, increasing by almost a quarter, although this was not enough to compensate for the decline in volumes from elsewhere.

In addition, import volumes of bacon and sausages both fell by around a quarter compared to the previous year. Meanwhile, processed meat imports (including hams, charcuterie) recorded a 14% increase on the year, with a particular uplift in product from Spain (+650%) and Poland (+48%).

Import prices remained higher than year earlier levels, so the value of imports was only down 11% on the year, at £183.9 million.