“November slaughter last year was somewhat depressed due to staffing challenges at abattoirs, and while we are also seeing problems this year, it seems we have nonetheless been able to slaughter more pigs,” she said.

The increase was driven by a noticeable 12% rise in English throughput while in Northern Ireland numbers were up by 1%. In contrast, Scottish slaughter remains depressed compared to last year, down by a third at 22,000 head.

Clean pig slaughter for the first eleven months of this year totalled 10.3 million head, 3.5% more than the corresponding period in 2020, with much of the gains made in the first half of the year, as processors caught up from the previous backlog at the end of 2020. 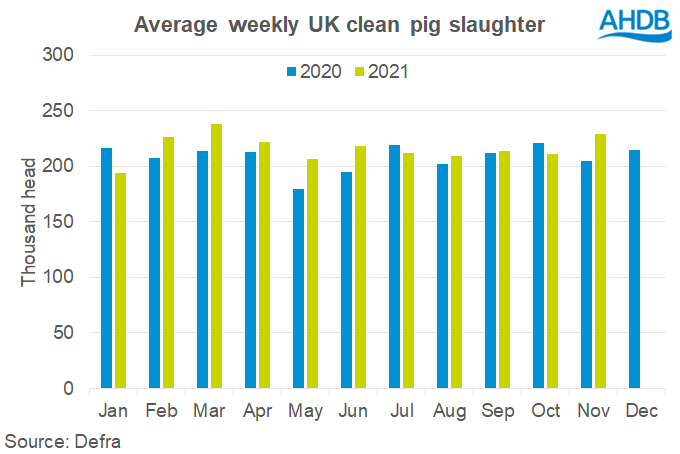 Meanwhile, reported figures for adult sow and boar cullings have been volatile in recent months. However, Ms Wilkins said the figure for November ‘seems more reasonable’, totalling 22,400 head, 10% more than the 2020 figure, which was quite low.

The official number for cullings in the year to date now totals 221,000 head, nearly 2% lower than last year. But AHDB’s estimates suggest the actual number may be somewhat higher than this at more like 238,000 head, which would be about 5% above last year, Ms Wilkins added.

The average UK clean pig carcase weight was the same as in October but still substantially higher than last November at 91.2kg. Weights remain elevated as there continue to be difficulties getting pigs to slaughter on time.

With both slaughter and carcase weights higher than year earlier levels, pig meat production was also up on last year, increasing by 11% to 93,000 tonnes.