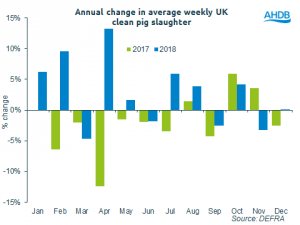 Mr Forshaw said that carcase weights dropped slightly in December compared to the previous month, however, weights were nonetheless above the 2017 level for the first time since August.

He said: “Averaging 83.2kg in December, the measure was 630g higher than the previous year. This is most likely indicative of fewer pigs being pulled forward as a result of poor demand over the December period.

Mr Forshaw added: “However it is worth noting that sow slaughterings in 2017 were unusually low, especially at the start of the year, meaning higher slaughter would be expected due to an older breeding herd. Nonetheless, the slaughter rate in the second half of the year is perhaps slightly above usual expectations, suggesting the worsening financial situation may have led some producers to reduce their herd size.”