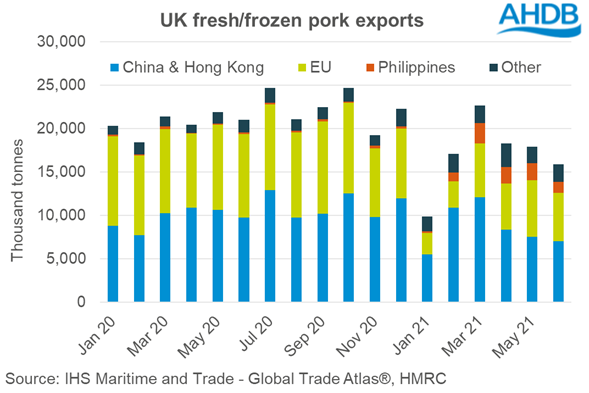 Imports of fresh/frozen pork were also lower year on year, by nearly 8% at 27,400 tonnes in June. Imports of most pig meat products were behind 2020 levels in June, except bacon, which recorded an annual growth of 4% to total 13,500 tonnes.

For the year to date, the UK has imported 335,300 tonnes across all meat products, 13% less than at the same time a year ago.

Mr Wyatt commented: “It wasn’t really until the end of June when EU pig prices started to fall quickly. In the latest week, ending 8 August, the EU average price was 126.5p/kg, 35p lower than its equivalent in the UK.

“These lower prices, combined with the continued gradual reopening of the foodservice market here, suggest increases in future imported volumes could be on the cards. This increase in trade could show in July and August trade data, so look out for further trade updates.”