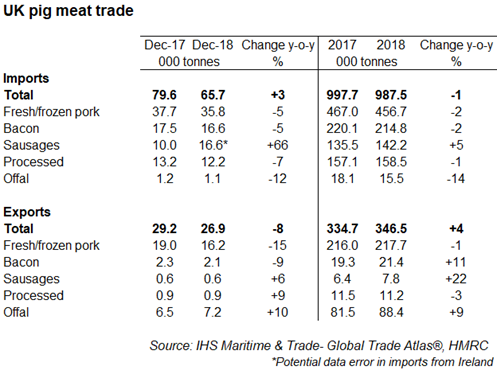 Felicity Rusk, an analyst at AHDB Pork, said that thanks to growth earlier in the year, UK exports of fresh/frozen pork reached 217,700 tonnes in 2018 overall, 1% higher than in 2017. This was not enough to compensate for lower prices, and so value actually declined by 1%, to £292 million.

She said: “Looking at pig meat and offal overall, exports totalled 346,500 tonnes, 4% more than in 2017, driven by increased shipments of offal products.

“In December, UK imports of fresh/frozen pork fell 5% compared to the same month in 2017, to 35,800 tonnes. The gap between EU and UK prices narrowed in December, possibly relieving some of the import pressure felt in the previous two months. However, the gap widened again in January, so the relief may not continue into the New Year.”

AHDB reported that imports from Denmark reportedly dropped off considerably in December (-3,600 tonnes). However, the impact of this was softened by an increase from Belgium (+1,100 tonnes) and most other key suppliers.

Ms Rusk added: “Bacon imports also dropped 5% in the same month, to 16,600 tonnes. Trade with Denmark and Germany fell, although there was an increase in shipments from the Netherlands.

“Sausages increased by 66%; this was driven by a very large increase from Ireland that does not match the Irish trade data so should be viewed with caution. Overall, imports of pig meat and offal in 2018 totalled 987,500 tonnes, a modest decline (1% or 10,200 tonnes) below 2017 levels.”