The companies are divided into six tiers depending on how their welfare performance is judged and the top tier, representing ‘leadership’, is dominated by UK companies.

Pig producer and processor Cranswick is there for the fifth year in a row, alongside Noble Foods, which retains its Tier 1 ranking, and retailers Waitrose and Marks & Spencer.

A number of UK retailers are included in the Tier 2 ranking, where welfare is considered ‘integral to the business strategy’, including Tesco, Sainsbury’s, the Co-op and Morrisons, alongside global pig company Danish Crown.

The ninth annual benchmark revealed that for the first time in its history, food producers & manufacturers are the highest scoring sub-sector on farm animal welfare. They achieved an overall average score of 38%, up from 35% in 2019, compared to scores of 36% for retailers & wholesalers, and 31% for restaurants & bars.

However, more than a third (39%) of the 150 companies covered by the BBFAW remain the bottom two tiers, including 23 producers and manufacturers, offering little or no information on their approach to farm animal welfare. In fact, 31 global food companies remain without an overarching farm animal welfare policy. 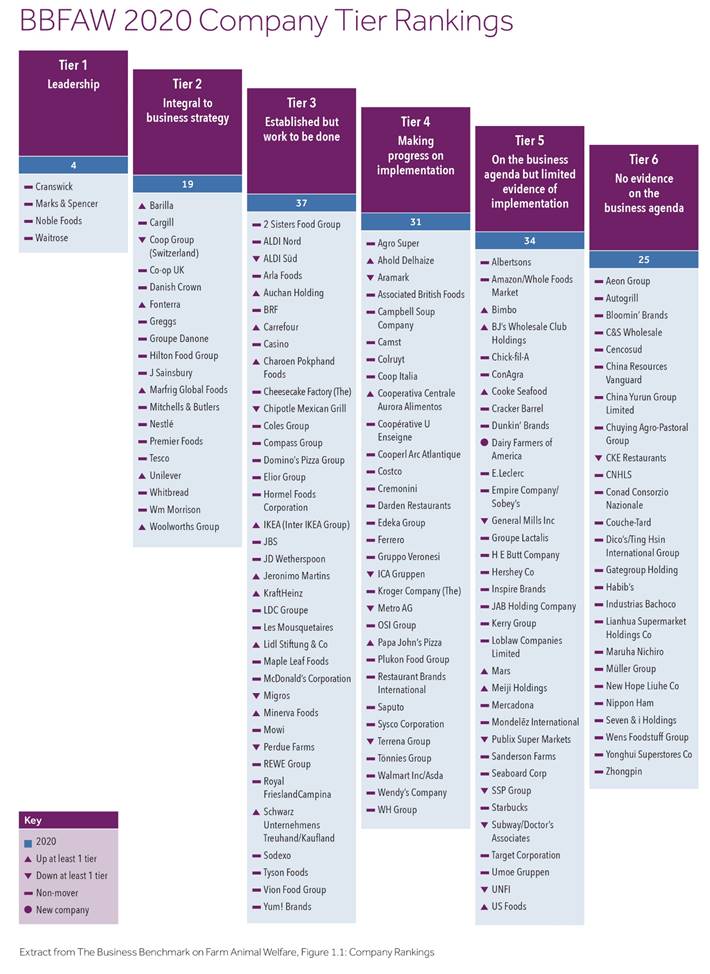 Overall, a total of 23 companies improved their score by at least one tier between 2019 and 2020.  Of these 23 food businesses, 13 were producers and manufacturers compared to nine retailers and wholesalers, and just one company in the restaurants and bars sub-sector.

“However, as BBFAW enters its tenth year, our expectation is that companies need to demonstrate how their management commitments are translating into improved welfare impacts for animals on the ground.”