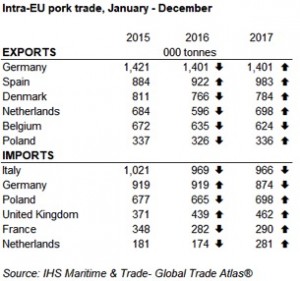 Over 80% of the volume exported originated from the six leading exporters. Germany continued to dominate, accounting for 24% of shipments, although this was one percentage point less than the previous year. Conversely, Spain increased its market share from 16% to 17%.

Imports of pork are more evenly distributed across the member states than exports. Italy remained the largest importer, receiving 17% the total volume traded. However, EU shipments to this country actually declined on the year. The second largest importer, Germany, also recorded a modest decline. As such, the overall increase in trade was driven by smaller destinations. The data suggests Dutch imports from the EU in particular increased by over 60% (+100,000 tonnes), which accounts for around half of the overall growth in trade. Nonetheless, Poland, Romania, the UK and Spain also all recorded pork import growth of between 10,000 and 35,000 tonnes last year.

This year, some anticipated growth in EU production might drive further growth in trade flows within Europe. However, demand from third countries, and in particular China, will be key. With the recent announcement regarding the imposition of tariffs on US pork into China, there may be scope to increase market share to this destination. As EU consumer demand remains somewhat challenging, this could alleviate pressure on the internal markets. Although, with other countries such as Brazil and Canada also eyeing the Chinese market, the extent to which Europe can capitalise on this opportunity remains to be seen.

Meanwhile the EU average pig reference price slipped during March, to €145.06/100kg in the week ending 1 April, down €3.54 compared to the four weeks previously, according to the EU Commission.

This decline came after a strong increase during February. The measure currently stands €16 below year earlier levels. The decline was not entirely unexpected as tight supplies were reported in February but the situation was not expected to last which is reflected in the recent weakening of the reference price. 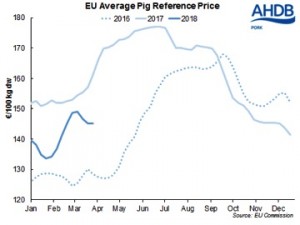 Of the key pig meat producing countries, Poland recorded the largest decline during the past four weeks, declining by €7.19, to stand at €142.83/100kg. The Netherlands, Germany and Denmark also all recorded price declines. Conversely, the Spanish and French reference prices both recorded gains, of €7.71 and €4 respectively.

The UK price increased during the four weeks ending 1 April, to €164.50/100kg. This is increase was largely due to marginally strengthening of the sterling. This means the UK premium over the EU price has widened during the most recent four weeks, to €19.36 although this is still narrower than the price difference recorded through the final quarter of 2017 and the first month of 2018.