Meanwhile, Farming Minister George Eustice continues to argue that a new FTA maintaining the current two-way trade flow, would be in both sides’ interests and easier to secure than many are claiming.
This was certainly the message Mrs May sought to portray as she set out her vision for ‘the greatest possible access to the Single Market, on a fully reciprocal basis, through a comprehensive FTA’.

However, following Mrs May’s speech, some EU leaders insisted they would not allow the UK to ‘cherry pick’ a deal giving it the best of all worlds, for example, easy Single Market access without core EU principles such as freedom of movement, and customs union restrictions.
FTAs are notoriously difficult and time-consuming to negotiate, meaning there is very real prospect, at least for a period following our departure from the EU, that
tariffs could be imposed on exports, including pork.

At the current EU tariff rate, this could amount to, for example, 45p/kg on sow carcases, 72p/kg for bone-in loins and 131.5p/kg for processed hams.
AHDB said this could have a ‘sizeable impact on the UK’s export market’, particularly the lucrative sales of sow carcases to Germany, with a knock-on effect on prices.
If no FTA was in place, at least in the immediate aftermath of Brexit, the UK could decide to apply tariffs to the large volumes of EU pigmeat imports (about 960,000t in 2015), possibly alongside quotas.

This would go a long way to mitigating the negative export effect, tightening domestic supplies and pushing prices up.
However, the worst-case scenario would see the Government keep EU import tariffs down to protect consumers, while tariffs were imposed on exports the other way.
The National Pig Association (NPA) stressed that Single Market access must be a priority for the UK Government, while ensuring equivalence on tariffs to and from the EU.

Non-EU trade
Current membership of the EU customs union means the UK not only trades tariff-free with other member states but imposes the same tariffs on imported goods from other countries outside it.

Leaving it potentially frees up the Government to become a ‘powerful force for free trade’ on global markets – but opens up an uncertain future for UK farming.
In the short-term, the UK could be forced to re-negotiate the 58 FTAs the EU has in place with other countries. However, AHDB pointed out none of these are major pork export markets.

And it is confident Brexit will not affect the main non-EU export destination. AHDB’s chief strategy officer, Tom Hind, pointed out the current export trade to China is not underpinned by an FTA, but works on the basis of UK exporters meeting strict technical requirements.
Nonetheless, the prospect of new trade deals with the likes of the US, Australia, New Zealand, Argentina and Brazil seem likely to present more threats than opportunities.

The US appears to be top of Mrs May’s wish list, after she met new president Donald Trump, who has spoken of his desire to establish a UK-US trade deal ‘very quickly’. In reality, it is unclear how high up his list we really are – and it is hard to imagine UK farming coming out well from such a deal, given Mr Trump’s ‘US first’ rhetoric. The same applies to deals with other big meat-exporting countries.

The danger is that new trade deals would be used by meat exporters to try and lower both tariff and non-tariff barriers to exports to the UK. The latter currently prevent pork imports produced in ways banned in the EU, such as use of ractopamine, a feed additive to promote leanness in meat, antibiotics for growth promotion and sow stalls.
The NPA is calling for the Government to insist on equivalent standards on imported pigmeat and, if necessary, to grant pork-protected status, to prevent the domestic market being swamped by cheaper, lower-standard imports.

Speaking at Oxford, Mrs Leadsom stressed she would not allow standards to be lowered in order to secure free-trade deals. But Mrs May, asked in the Commons whether she would tell President Trump she was not prepared to lower our food and safety standards, said only she would seek a UK-US trade deal that ‘improves trade between our two countries’, adding that ‘we will put UK interests and values first’.

Liberal Democrat leader Tim Farron said: “British farmers risk facing a perfect storm, losing tariff-free access to vital European markets while being undercut by imports from the US and elsewhere.” 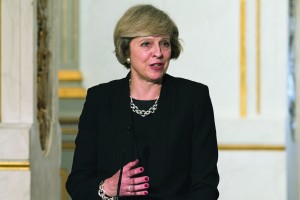 Labour concerns
The Government’s determination to control immigration could become a major problem for the pig sector.
Immigration Minister Robert Goodwill has told the NPA, in response to a letter on the issue from association chairman Richard Lister, that the British public have sent a clear message that greater control of the numbers of people coming here from Europe must be a priority.

Mrs Leadsom said it was key that the UK Parliament will control immigration but sought to reassure OFC delegates that ‘we in Defra will be absolutely focused on getting the right workforce for the food and farming sectors’.
She indicated that the Government is considering seasonal worker schemes to fill the gap, something the NFU is pushing for. However, the NPA is arguing that future immigration policies must not jeopardise access to the permanent workers, skilled and unskilled, that the UK pig sector relies heavily upon.

Cranswick chief executive Adam Couch has said his biggest worry, with up to 65 per cent of his staff being foreign workers, mainly from Europe, is a post-Brexit labour shortage.
NPA chief executive Zoe Davies warned the Government’s immigration policy ‘could result in serious unintended consequences if politics triumphs over economic reality’. “Without EU labour there will be no British pig industry as we know it,” she said.