The article added, ‘with a note of optimism’, according to AHDB analysis Duncan Wyatt that: “Based on this growth trend, it is hoped that the number of pigs available will recover to the level of previous years before the outbreak of ASF, in the second quarter of 2021.”

Mr Wyatt said the recovery was ‘perhaps quicker than many in the global pork industry expected’.  “But are there any signs that it is already having an effect on the market?” he asked.

“COVID-19 is disrupting both ends of UK-China trade to some extent, which clouds the issue. Industry reports indicate containers are being held at Chinese ports and being tested for COVID-19.

“This, and other measures, are apparently starting to cause a backlog of containers in port. In any case, it is not clear that import demand for UK pork could increase much further anyway. With some UK plants still self-suspended from exporting to China, a reduction in volume is more likely. 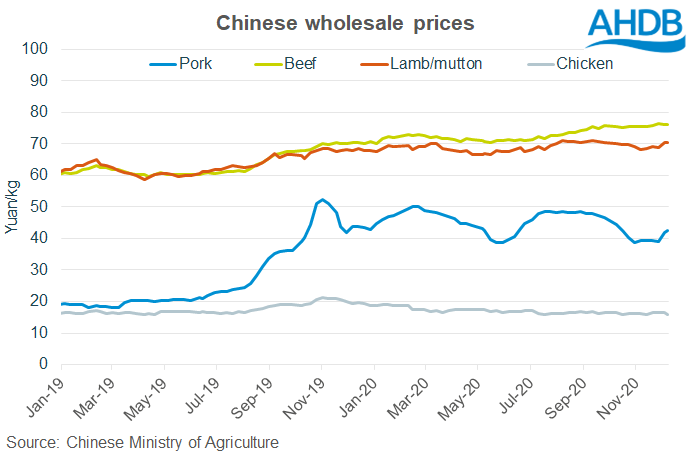 A whole pig cut six ways and exported to China is reported to be worth around £1.90/kg now. This product was perhaps worth as much as £2.50/kg at the peak, reflecting the currently weaker wholesale price for pork generally, Mr Wyatt explained.

The number of live pigs that Chinese farmers are sending to has generally been increasing. According to official statistics, in week ending December 5, the price of a piglet was 84 yuan/kg (£9.66), down from 116 yuan/kg (£13.35) at the end of September, due to the increased supply.

“However, more recently, some reports suggest a slowdown in the slaughter market, with some farmers holding off from selling in case prices rise,” Mr Wyatt said.

Finished pig prices in China are increasing at the moment, averaging 32.87 yuan/kg (£3.78) on 5 December, an increase of 10% from the week before. The national average pork wholesale price also increased in the latest week.

“In the short-term, pork consumption is expected to grow during December, supporting domestic pig prices for now. Import demand may grow too, if logistical challenges don’t prevent this from being realised,” Mr Wyatt said.