Of the key producing countries, Germany recorded the largest pig price rise over the past four weeks, gaining €21.08, to reach €156.75/100kg. Spain, the Netherlands, and Poland also all increased by over €10 over the period, while growth in the Danish and French price was more modest.

Conversely, the UK price has remained on a downward trend. For week ended 4 March, the UK reference price stood at €162.64/100kg, €2.87 less than four weeks previously. Some weakening of the pound exaggerated the decline in euro terms. This means the UK price premium over the EU average has been narrowing, reaching just over €14 in the most recent week, the smallest difference since September. If this is sustained, the improved price competitiveness of UK pig meat, compared to EU product, may ultimately provide some support to UK domestic prices.

This news comes alongside figures from Eurostat which confirm that pig supplies were lower overall in the EU last year.

Cumulatively in 2017, throughputs reached almost 255 million head, 1% lower than in the previous year. Despite some increase in carcase weights, pig meat production also declined by 1%, to 23.3 million tonnes. 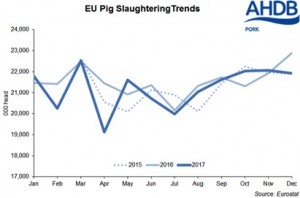 Nonetheless, throughputs in the final quarter were actually comparable to 2016, at 66 million head. Production levels were boosted marginally on the year by rising carcase weights. Higher throughputs in October and November were countered by a 4% drop in slaughterings in December, compared to year earlier levels.

On an individual country basis, as the largest pig producer in the EU, a 3% decline in German slaughterings was key to driving the overall fall across the year. Danish throughputs were also back a noticeable 4%, as were slaughterings in Italy. In contrast, Spain and Poland both bucked the trend and recorded throughputs rising 1% year-on-year. These two countries have seen particular investment in the pig industry in recent years, and with growth in their sow herds recorded during the December census, further expansion looks likely this year.

Most other key producers also look set to increase production in 2018, following breeding herd growth. However, Germany is a notable exception, with the number of sows actually slightly lower than year earlier levels at the end of last year. The threat of ASF, and increasing regulations, is likely limiting confidence in the sector and deterring expansion. As the German sow herd is the second largest in the EU, the lack of expansion from this country could limit any overall increase in European slaughterings in 2018.