Mr Baker said: “I’m flabbergasted at the result, we’ve been producing charcuterie for just six months, although there’s been a lot of blood, sweat and tears in developing the range going back several years. I’m delighted to be a winner, and it’s a great motivation for us to carry on with what we do.”

Mr Beals said: “What stands out for us is the strength in the competition, the sheer amount of product getting gold and silver is the best thing ever for British charcuterie. Winning Champion Product is an endorsement of the hard work that small artisanal producers put in, and for us to get recognition within such a high level award makes Monday mornings worth it!”

Organiser Henrietta Green said: “We are simply delighted at the quality and level of entries for our 2018 awards. We were astonished at the number of British producers currently making great charcuterie, far more than we originally hoped for, and want our 2019 awards to attract even more producers to enter.”

The full list of award winners cane be viewed HERE. 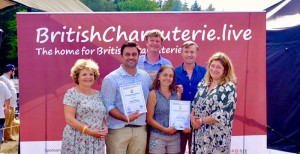